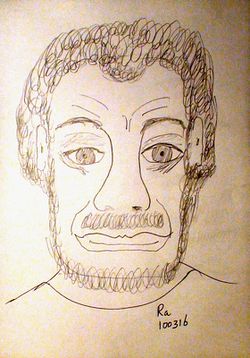 This page is part of an ERW course: Origin and migrations of humans.
By John Eagles, September 9, 2009.

The following is information i acquired from a man in spirit world who lived long ago. He said his name is Ra and claims to be one of the first migrants to America. I pass on the story as he told it to me. Although he gave me the impression to be reliable, i don't know if all the details he told me are correct. I'll give account of the main story as he told it. If you want to know more details, ask me in comments.

As for the time period of the events described, this is very difficult to confirm as he lived in spirit world for a long time and could not very well keep track of it. But he said he thinks that he lived over 40,000 years ago.

They lived on a small island, as far as we could check, this was an island in the Mediterranean Sea, north of Africa. He described their skin color as dark but not entirely black. The diameter of their island was two days walking from coast to coast.

They had a close relationship to spirit world and it was told to them that their tribe had to migrate to another place on earth. Spirit world had told them that the earth was round and the destined land was in the West. For several generations they prepared the project and eventually made three large ships with which they went on their adventure.

The ships were 100 meter long, 5 meter wide, one stock high and were moved by rowing.

Spirit world pushed them on their journey and guided them all the way. The entire trip took almost half a year before they arrived, most probably in Meso-America.

More than one week before they arrived at their destination they came across some islands where 500 of the entire group of 2,000 people stayed behind.

After they left, they at first past several coastlines before they came to open sea. The current first was against their direction but later, until the end, the currents helped them.

Their tribe had one main leader and 12 sub-leaders. They believed that they had to build a kind of heaven on the new land where they would come to settle.

Already for generations they had visited other islands and the mainland using canoe-like ships moved by rowing. At each side of the ship, rowers were working in lines.

For their journey to the new land (America) they had made three large boats, which were interconnected like present-day catamarans. The connections were made with tree-trunks more or less loosely bound with ropes. The catamaran system was for stability and also so that the three boats would not get separated on the ocean.

This is how the hull was made: It was composed of 10 layers of split, not sawn, wooden planks, about 1 cm thick and 10 cm broad and several meters long. All the layers were glued together and made watertight with a substance of tree resin mixed with animal fat or grease. This made a strong and flexible construction of more than 10 cm thick. The hull was round and smooth so high waves had little effect on the boat.

The top of the boat was closed. There were only a few hatches on top and many more to close the holes for the oars when there were high waves. In the rear of the boat was a room for eating and resting. At the front was space for steering the boat and for watching out.

They had taken with them a lot of dried food and did some fishing on the way. When they saw whales for the first time, it scared them, but later they realized that whales did not harm them. They made their own fresh water by boiling seawater in a large pot and leading the steam into a big container.

While on the midst of the ocean for many months, they often doubted but angels and spirit world always kept pushing them into the same direction.

He said they were lucky to not encounter any major storms on their trip.

When they went ashore on the new land, they moved farther to the inland after a few generations. Ra was already in spirit world then.

He said that their people were attacked by evil spirits on the new land and from spirit world, 15,000 years later, he organized a new tribe and inspired tribes on earth to move farther south, probably to the Andes mountains. He sees the Inca and other tribes now living in Peru and Chili and Bolivia as his descendants.

According to what he heard in spirit world, later there came three waves of new immigrants from the North of America, probably these were the ancestors of the Native Americans who arrived over the Bering Strait.

Retrieved from "https://eagle-rock.org/w/index.php?title=The_story_as_told_from_spirit_world_by_an_ancient_first_immigrant_to_America&oldid=13177"
Category:
This page was last edited on 10 June 2015, at 17:34.
Privacy policy
About eagle-rock.org
Disclaimers