High density planting - Is it really worth the incredible expense? 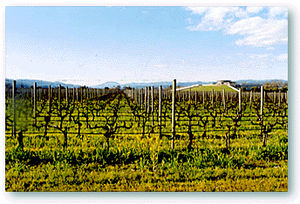 I recently saw vineyards at Opus-1 Winery planted 2,700 vines per acre and I read last week that Robert Mondavi is looking at squeezing up to 4,000 vines onto a single acre. What is the theory behind the practice of high density planting?

The theory is that in nature when vines compete with each other (4,000 plants per acre would be 1 meter x 1 meter spacing) the grapes, in their little plant brains, think they need to mature their seeds faster lest their neighbors will get all the goodies. Grape vines, after all, are in the business of producing seeds so that's their first order of business. Vines that grow without competition can cover an entire oak tree but would tend to produce an enormous amount of vegetation and little fruit. Furthermore, the fruit they produce matures late, and the seeds tend to be less lignified (hardened) than the highly competitive, densely planted vines.

Grapes under high density planting presumably will have smaller berries and consequently more concentrated fruit and flavor components because the grape skin, where the flavors are most intense, is much higher in relation to the amount of pulp, hence you get more intense flavors.

This is what the wine growers are shooting for in high density planting. However, at this point this is still theoretical. As yet there's no American studies on this although the practice is gospel in Europe.

The practice of high density vineyard planting is imported from France. If you ask a Burgundian about this, they will tell you this is how they've been growing grapes for the last 2,000 years so there's a historical and regulated attachment to the practice.

Vineyards near Gau-Bickelheim in the Rhine Region

There is one practical component to high density planting that is proven, though.

In a high-density vineyard, the vines are trellised very close to the ground. The reason is, you cannot exceed a 1 to 1 ratio in terms of how high you can trellis. If your plants are spaced 1 meter by 1 meter, your trellis can only go up 1 meter or you'll cast shade on the grapes to the next row.

Because the maturing grapes are so close to the soil, heat radiates from the gravel, rocks and soil to the plants which causes them to mature earlier than if they were trellised higher. This is crucial in cool climate regions such as Champagne or the Rhine where there's a constant danger that there won't be enough heat to mature the crop.

It's only natural that growers in northern latitutdes would embrace the practice of high density planting because they know it will help them mature the crop. Whether it's a good idea for California grape growers remains to be seen.

High-density planting is very expensive. A traditionally dense vineyard can cost as much as $20,000 to plant 700-1000 vines. 4000 vines per acre is 4 to 5 times the cost just for the capital investment. You also have increased annual direct farming costs since you'll have to drive your tractor up and down four to five times as many rows. Cultural practices cost more as does control for mildew. Furthermore, we don't know the impact high-density planting will have on the humidity in the canopy which is a crucial factor for controlling bunch rot and other maladies.

To accomplish high-density planting involves huge capital costs and as yet there's no convicing evidence that high densities has that much affect on the quality of the grapes. To put it briefly, the jury is still out on this issue. One thing is certain, though, and that is it's going to cost someone a fortune to find out. We have more questions than answers at this point and while it may sound logical to plant densely we don't know what the returns on this investment are.

A conservative view is that the Napa Valley's most famous vintages come from traditional vineyards. Wines made from the high density or nouveau high-tech vineyards have yet to be released. Opus-I actually has vines on three different properties and only their their winemaker knows for sure where the current releases are coming from. But you can be sure we'll be seeing more high density plantings in Napa and Sonoma, especially as the price of land continues to climb.

So there you have it. It's an expensive experiment. We see quite a diversity in spacing and trellising in Napa all up and down the valley. It's all a matter of the individual grower's style and taste and willingness to experiment and that's one of the hallmarks of the industry, namely the constant search for new methods, new varietals and new practices with the aim of producing better vintages.

Retrieved from "https://eagle-rock.org/w/index.php?title=High_density_planting_-_Is_it_really_worth_the_incredible_expense%3F&oldid=6610"
Categories:
This page was last edited on 26 November 2022, at 08:56.
Privacy policy
About eagle-rock.org
Disclaimers