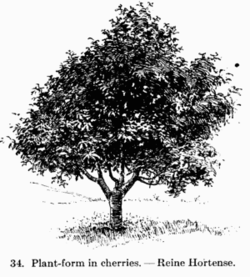 These tips come from a book[1] written in 1910 but the rules are still valid.

For [most fruit trees] a pyramidal form will be desirable. To secure this, four or five side branches with three or four buds each, should be allowed to grow and the center shoot should be cut off at a height of 10 to 12 inches. After growth has started, the trees should be occasionally examined and all surplus shoots removed, thus throwing the full vigor of the plant into those that remain. As a rule three or four shoots on each branch may be left to advantage. The following spring the shoots should be cut back one-half and about half of the branches removed. Care should be taken to avoid crotches, and if any of the branches cross, so that they are likely to rub, one or the other should be cut out. This cutting-back and trimming-out should be continued for two or three years... Although an occasional heading-back will be of advantage to the trees, apple, plum, and cherry trees that have been properly pruned while young will not require so much attention after they come into bearing.

Heavy pruning of the top tends to the production of wood; therefore the severe pruning of orchard trees, following three or four years of neglect, sets the trees into heavy wood-bearing, and makes them more vigorous. Such treatment generally tends away from fruit-bearing. This heavy pruning is usually necessary in neglected orchards, however, to bring trees back into shape and to revitalize them; but the best pruning-treatment of an orchard is to prune it a little every year. It should be so pruned that the tops of the trees will be open, that no two limbs will interfere with each other, and so that the fruit itself will not be so abundant as to overload the tree.

Retrieved from "https://eagle-rock.org/w/index.php?title=Pruning&oldid=9347"
Categories:
This page was last edited on 22 May 2012, at 18:00.
Privacy policy
About eagle-rock.org
Disclaimers