We've discussed the pros and cons of high density vineyard planting twice but have never actually discussed optimum vineyard density and how one decides how many vines to plant on a new site.

We vineyardists have a standard answer to that and it is called the "site specific" answer which actually turns into the question: "What is the depth and texture of your site?" Let's say you have three different soil profiles on your ranch. 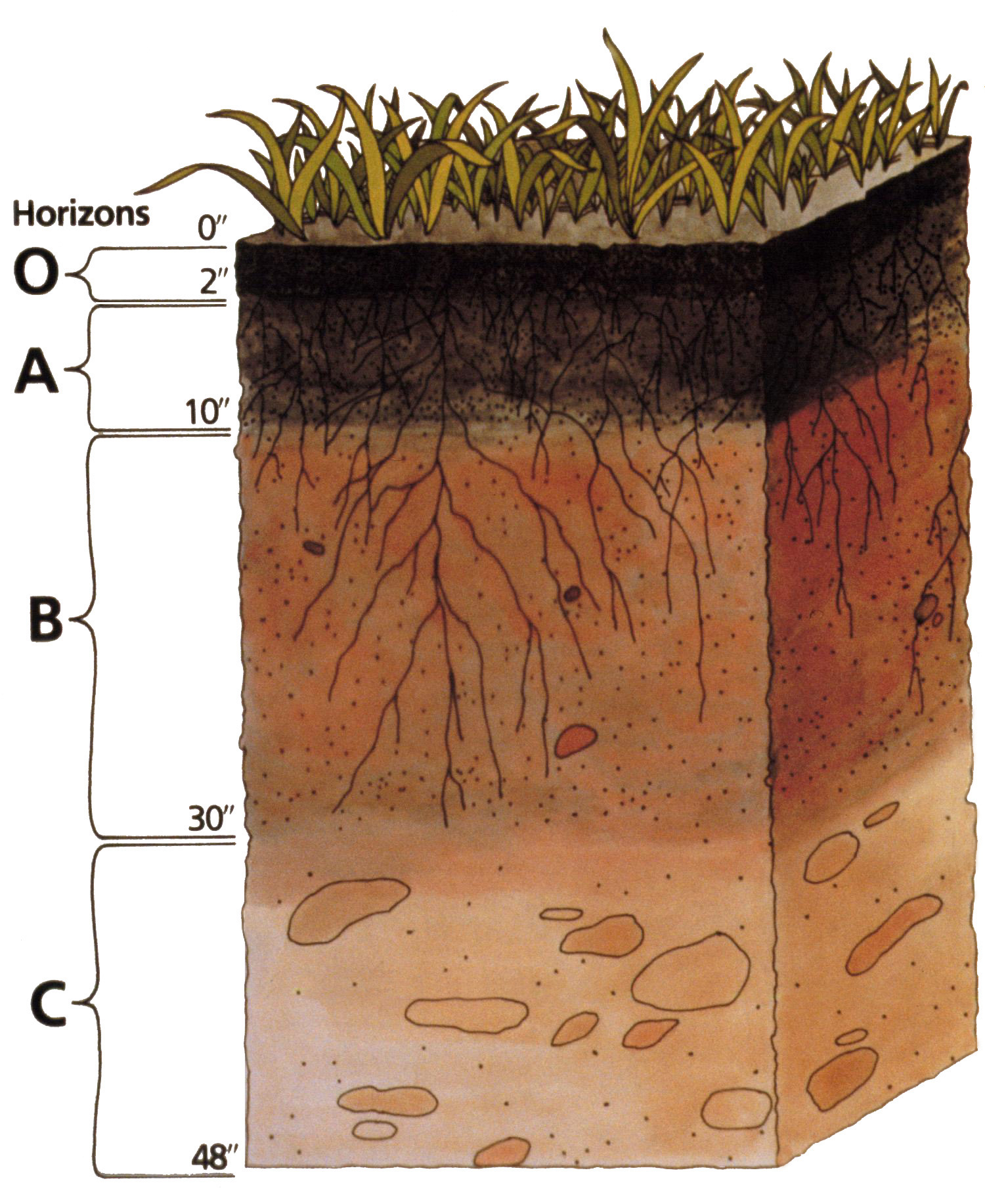 A) Surface soil: Layer of mineral soil with most organic matter accumulation and soil life. This layer eluviates (is depleted of) iron, clay, aluminum, organic compounds, and other soluble constituents. When eluviation is pronounced, a lighter colored "E" subsurface soil horizon is apparent at the base of the "A" horizon. A-horizons may also be the result of a combination of soil bioturbation and surface processes that winnow fine particles from biologically mounded topsoil. In this case, the A-horizon is regarded as a "biomantle".

B) Subsoil: This layer accumulates iron, clay, aluminum and organic compounds, a process referred to as illuviation.

Suppose site one is the lowest field on your property and is an alluvial deposit that has over the centuries accumulated six to ten feet of loam. This in my book is considered a high-horsepower soil. Because of it's depth, it has abundant fertility and high water retention (in the neighborhood of 6"- 8"). Hence at a site with this much fertility we would envision a vine that would grow more like a tree. Historically, sites like this have produced high-tonnages but require plenty of pruning because of the vigor of the vine. Under these conditions you would plant a grape variety that will produce a lot of tons per acre.

For example, white varieties such as sauvignon blanc or viognier would thrive under these conditions. The vines would be expected to grow large as trees and occupy a lot of square footage. In such a site, the standard 8'x12' spacing would hold 454 vines per acre and leave plenty of room to install a split-canopy trellis such as the open lyre or the geneva double curtain. These two trellis systems have a lot of hardware and wire in order to spread a single row into two walls of foliage that can span between 36"-48" between curtains.

These two trellis systems were introduced as retrofit solutions to vineyards suffering from the 'California Sprawl' called so because, with a single curtain vine row, vines soon overgrow their two wire supports. Therefore, under the above described conditions, 454 vines per acre would be optimal. If you were plant more, the vineyard would just experience crowding and possibly reduce production.

For contrast, let's examine site two, a hillside high on top of one of our local mountains. With a thin soil covering, perhaps 12"-18" inches deep with plenty of cobble and fractured sandstone, a soil like this, ten years ago would have been considered insufficient for grape vines. Today, we know that with aggressive rootstock these soils are being successfully planted. Planting thin soils in the days before irrigation was problematic because the vines would run out of water by May or June. Since there is so little soil relative to rock, it doesn't have much water retention capacity. This is a risky proposition to a certain extent. If you plant on soils like these and your pump breaks, you're toast. The plants have no backup water storage in the soil in the event of draught. However, with a dependable source of water sites like these are being planted with successful results. Remember that most of the red wine grapes benefit from this type of soil.

Visualize the vine that would grow under these conditions in contrast to the tree-trunk vine that will grow on deep soils. These vines would be scrawny by comparison, tenaciously carving an existence out of difficult conditions. I say, if you're going to grow a bonsai vine, why not plant them close together? These grapes will produce shoots with modest growth, closely spaced inter-nodes and clusters with small berry diameters, hence a high ratio, when crushed, of skin to juice. Wines produced from these grapes tend to be concentrated, high in extract and deeply pigmented with lots of tannin. Dunn Howell Mountain Cabernet Sauvignon are a good example of grapes grown under these conditions and are highly concentrated, inky, chewy, and age for ten to twenty years. These kinds of soils produce competition wines. Hence, they're superior for cabernet sauvignon, cabernet franc, zinfandel, syrah and other full bodied reds.

Since the vines under these conditions would be small we can compensate by planting many vines per acre. For example, in-row spacing of 3-4 feet would probably be enough space. Row width can be as narrow as 6'-8' feet mainly as a function of the slope and size of equipment necessary for vineyard maintenance. If you're on a hillside with a side-fall, you want enough wiggle-room so you don't demolish your vines with your tractor. Consequently, optimum vineyard density would be 1,100 to as high as 2,500 vines per acre. Historically, hillside vineyards were handicapped by low yields in the 1-4 tons per acre range due to conditions like those at this example site. On this type of soil, annual production is, in fact, increased by adding more vines. In these days with the cost of land so high, more vineyards such as described here are opting for the higher density. The associated costs are higher. But that's showbiz.

Let's suppose that site number three is a bench fan formation with loam top soil with some cobble but is underlayed by an impervious layer of clay or bedrock so that the effective rooting depth is 36"-48". A vine planted here benefits from the residual rain water holding capacity of the soil and produces three to four feet of shoot growth before the growing point rests about mid-summer. No sense in giving this vine a huge GDC or Lyre trellis or a tight ultra-close spacing. Four to six feet between vines in the row and eight to nine feet between rows is just right. In fact, there's probably almost nothing you could do wrong as this site because the soil texture provides the appropriate amount and availability rate of nutrient and moisture to produce moderate growth that would be well suited to 900 to 1400 vines per acre.

The answer to all vineyard spacing questions begins with "It depends on..." I design my vineyards to adapt to the environmental conditions. This isn't 'Zen Viticulture,' it's just common sense. Recently it has been popular to apply higher density spacing to all new vineyards, however, it's counter-productive to do so in deep, high-horsepower soils. The 1978 soil survey of Napa County identifies over sixty different classifications of soil. Overlay that diversity with variable depths, rainfall, slope, rootstock, variety and management practices and you can see why viticultural practice is as much art as science. It's no wonder that Napa Valley produces such a great diversity of wine and wine styles.

Retrieved from "https://eagle-rock.org/w/index.php?title=Arriving_at_Optimum_Vineyard_Density&oldid=6768"
Categories:
This page was last edited on 17 February 2012, at 17:35.
Privacy policy
About eagle-rock.org
Disclaimers