All pages in The Cosmos Times

This page is part of an archive of articles that were published in The Cosmos Times.
The Cosmos Times provides news concerning the entire cosmos.
Research the facts and keep working on your opinion.

News in The Cosmos Times is selected for the following topics: 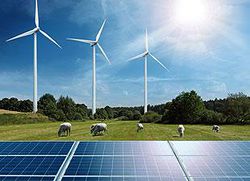 Unlike traditional photovoltaic cells that convert photon energy directly into electricity, Brenmiller [Energy] decided to go the other way around and use the sun’s heat. Using parabolic mirrors to concentrate the sun rays on a smaller patch, the resulting heat (around 500 degrees C/932 F) is used create steam, which then powers turbines and generates electricity.

A firm from Stockton-on-Tees, UK, has succeeded in synthesising gasoline from water, and carbon dioxide (CO2) extract from the air. Air Fuel Synthesis Ltd (AFS) was founded in 2009 to create carbon-neutral liquid fuels from renewable energy sources.

The 1.7MW plant planned at Nishihira Pond will become the world’s largest solar power generating system installed on water, while the two will have a combined the combined output of 2.9MW. In a statement the firm said: “Due to the rapid implementation of solar power, securing tracts of land suitable for utility-scale solar power plants is becoming more difficult in Japan.

So why bother unraveling the secrets of water splitting? Understanding the mechanism is essential for the development of artificial systems that mimic and surpass the efficiency of natural systems. In the case of plants, it may be possible to create an "artificial leaf" that could actually generate power.

The team from the Harvard School of Engineering and Applied Sciences (SEAS) believes the temperature difference between the Earth, warmed by the Sun during the day, and the surrounding freezing-cold vacuum could be transformed into direct current, making available vast but yet inaccessible energy resources.

Researchers have made a new breakthrough in solar cell efficiency — Jan 6, 2014

A research team found that by manipulating the structure of polymers within the solar cell they could increase its efficiency by 30 percent, a North Carolina State University news release reported.

Hydrogen squeezed from stone could be new energy source — Dec 12, 2013

Scientists from the University of Lyon have discovered a new way to split hydrogen gas from water, using rocks. The method promises a new green energy source, providing copious hydrogen from a simple mixture of rock and water.

Researchers discover new way to harvest electricity from plants — May 13, 2013

Ramasamy's technology involves separating out structures in the plant cell called thylakoids, which are responsible for capturing and storing energy from sunlight. Researchers manipulate the proteins contained in the thylakoids, interrupting the pathway along which electrons flow.

These modified thylakoids are then immobilized on a specially designed backing of carbon nanotubes, cylindrical structures that are nearly 50,000 times finer than a human hair. The nanotubes act as an electrical conductor, capturing the electrons from the plant material and sending them along a wire.

Retrieved from "https://eagle-rock.org/w/index.php?title=Cosmos_Times:Alternate_Energy&oldid=13943"
Categories:
This page was last edited on 21 March 2016, at 10:51.
Privacy policy
About eagle-rock.org
Disclaimers