This is the first in a series of articles on ground water in Napa County, and the proper procedures to follow in assessing a property's ground water potential, how to explore for it, and the methods used in designing, equipping, developing, and maintaining a well for maximum efficiency. My own experience with exploring for water in Napa extends back for the past 23 years as a consulting ground water geologist, during which time I have worked on several hundred properties. Charles Kamins, Managing Editor of the Real Estate Reader, was one of my clients, and he solicited these articles in the belief they would be a public service. (During the drought of 1976-1977, I wrote an article on Marin County's ground water and sent it to the Independent Journal, a San Rafael newspaper. It was turned down, with an editor explaining to me, "The intelligence level of our readers is so low that no one would be able to read and understand it.") 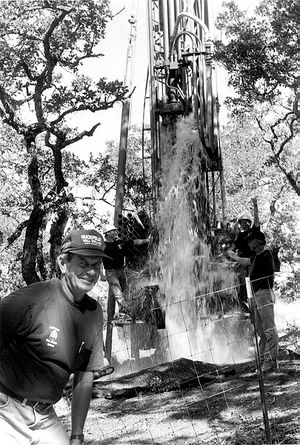 Ground water is that water found beneath the earth's surface, and it is one of Napa County's most important resources, supplying water to thousands of wells serving homes, businesses, and agriculture. Useful amounts of it occur in permeable zones of rock (usually lenses of gravel and sand, or fractures in hard rock) called aquifers that lie below the water table. (Below the water table, all openings in the rock are full of water; above it they contain nothing but air.)

Like any other industry based on scientific facts, there is no place in the well drilling industry for superstitious practices based on ignorance. This being the case, it is best to begin educating the reader by driving out of his mind any acceptance he might have as to the legitimacy of witching for water. Witching thrives on the average person's lack of training in geology and hydrology, and his not being able to see ground water in place, all of which tend to make ground water something of a mystery.

This leaves him prone to accept the false claims of self-confident-acting witchers that they have a special gift or talent for finding ground water with some sort of nonsensical apparatus such as a forked stick or a swinging chain. The witcher's main appeal is his simple explanation of how ground water occurs in underground streams and lakes (just like surface water), and how the flow of this water creates some sort of force that can be picked up and amplified by his body and/or the apparatus he is holding while standing over the water. This makes the apparatus bend (a forked stick) or swing (a chain held vertically). Understanding this nonsense is one thing, but believing it is something else; truly, the state of the development of the human mind can be gauged by its ability to eliminate the incongruous. (Newspapers bear much of the blame for spreading the doctrines held by witchers, as they like the local color angle and give them uncritical write-ups.)

Water witching is not just a harmless yokelism, as it greatly interferes with the proper collection and interpretation of the facts. This results in the drilling of millions of dollars in dry holes in obviously unfavorable rock, and the installation of costly surface water supply systems that are not needed. (It has to be understood that very few engineers know anything about ground water or well drilling.) To begin this analysis, I'll point out that the U.S. Geological Survey and the National Water Well Association have published articles against witching. Additionally, numerous tests have been run on witchers under controlled conditions, and not one witcher has ever proved he could do better in predicting water than simple random guessing.

How to "witch" a well

To get down to cases, first the witcher claims that ground water exists in solid bodies of water in the form of streams and lakes (which can be true in cavernous limestone country, or in the form of lava tubes), and so the location of the well is highly critical. After all, surface streams and lakes cover only a small percent of the continents. This is why he marks his proposed wellsite with a stake or an X on the ground. (For underground lakes, a witcher should outlining an area rather than picking a point, and for a stream he should be layout a course.) Now if a solid body of water were to be drilled into, naturally it would be written up on the driller's log of the well as "hit stream," or "hit lake" but of the thousands of drillers' logs I have examined (even those made out by drillers who either witch, themselves, or who recommend witchers--more about this later) there has not been a single such notation! What the logs of successful wells do mention is something on the order of "loose sand and gravel," or "hard rock with fractures," where water was found.

Of the hundreds of wells and dry holes whose drilling I have supervised, I have yet to see a sudden free-fall of the drill pipe such as would occur if there were nothing to impede the drill bit except water.

The witcher's X or stake implies that the water occurs in some sort of a narrow, vertical column, like a natural posthole. Of course, such a restricted reservoir could not contain very much water. Second, local witchers say the ground water originates in such far away places as the Sierra Nevada or Mount Shasta, and it reaches the county via underground streams. These ideas are pure fantasy, as there are numerous barriers of impermeable rock in the Coast Range--not to speak of no underground streams. Except for some original sea water trapped in marine sedimentary rocks, local ground water comes from local rainfall and surface streamflow that percolates into the ground--it is that simple.

Third, the witcher claims the movement of the inanimate stick, or whatever, he is holding is proof of the existence of a force created by ground water. Well, believe it or not, the forked stick moves because the person holding it makes it move. (Do your socks get on your feet by way of mysterious forces?) A slight, simple inward rotation of the wrists makes the end of a forked stick bend down, while outward rotation of the wrists makes it point up. In 30 seconds I can show anyone how to do what a witcher does.

Fourth, witchers claim they can witch for water on maps, without having to actually go to a property. One unique fraud proclaimed he could witch a map of a property with a dry hole, find a stream with his stick, and then bend the stream over to intersect with the dry hole so it would produce water. Lazy or rushed witchers will merely stand in one spot and point their stick about the property, with the stick bending when its direction intersects a stream. Fifth, any witcher worth his salt says he can predict exactly how far down it is to water, and what the flow will be, merely by asking these questions of his stick. In Napa County the stick obliges by bending once for each foot of depth to the stream, or for each gallon per minute it will produce. (Witchers in Europe, which is on the metric system, interpret each dip as either one meter or one liter.)

Sixth, witchers state that the mineral quality of the water can be determined in advance of drilling by asking the stick such questions as "Is the water salty?" If the answer is yes, the stick dips. A person with an inquiring mind might ask why some supposed professionals, like well drillers and pumpmen, either will witch, themselves, or will recommend hiring a witcher. (A definite minority will recommend an experienced ground water geologist.) To begin with, a property owner, or a prospective buyer, faced with putting out $2,000 to $3,000 for drilling a test hole (meaning an uncased hole) prefers to hire a driller who knows where the water is; so witching becomes a sales technique. Witchers always say there is water under a property, and the driller gets paid by the foot --water or no water. If the recommended witcher proves wrong, the blame is put on his head, rather than the driller's; but the witcher always has plenty of excuses. Inexcusably enough, the state does not require a well drilling contractor to show any knowledge at all about the simple principles of ground water occurrence--or even proper well design.

How does a witcher explain a dry hole? A common excuse is the hole was crooked, and so it missed the stream; or the water is deeper--a matter of a slight miscalculation; or the driller drilled too fast and crushed the streams (like flattening pieces of pipe).

What about witchers' claims of total or near-total success rates? There are areas where it is impossible to miss water, no matter where a well is drilled. And, the average person hiring a witcher has no idea of his true success ratio--one driller told me of seeing a witcher he knew on television saying he had never missed, but the driller had just drilled nine dry holes in a row that the witcher had picked! Since witchers do not study the rocktypes under a property, in areas where there is much impermeable rock their successes are few. Even a good ground water geologist is not immune to picking dry holes, but these are usually less costly than those picked by witchers because the geologist has said to stop drilling when the rock turns unfavorable; while the witcher has said to drill to some definite depth, no matter what the rock is like.

For a driller to witch for water, or to recommend a witcher, should be as reprehensible as for a doctor to be, or recommend, a quack. This practice falls under the classification of misinformed implied consent, meaning the client has contracted for work on the basis of what he considers to be competent professional advice, but which is actually completely phony.

To sum up, if anyone tries to convince you that there is a sound basis to water witching, the best method of weighing his arguments is as if he were trying to make you believe the world is flat.

The next article will cover the general geology of Napa County, with comments on the various rock types and their water-bearing characteristics. A map of the county's surface geology will be included, along with some generalized geologic cross-sections showing how the rocks project at depth.

Eugene H. Boudreau is a publisher, author and geologist living in Sebastopol, California.

Retrieved from "https://eagle-rock.org/w/index.php?title=Demystifying_Ground_Water&oldid=14029"
Categories:
This page was last edited on 25 March 2016, at 08:19.
Privacy policy
About eagle-rock.org
Disclaimers