Evaluating an Existing Vineyard for Purchase or Redevelopment 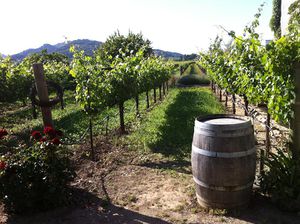 The value of an existing vineyard can be evaluated based on it's crop price history, however, there are additional considerations to evaluating an established vineyard. Before the trend to promote grape varietals as a part of branding, the main consideration of a wine's quality was indicated by its location. To this day, most European wines are identified, not by the variety of grapes but by the locale in which the fruit was grown. This corresponds to an elemental factor in the quality of wine, namely terroir[1].

For this reason, worldwide laws strictly regulate identification of the location of manufactured wine. Champagne is the most familiar example. Whereas the region of Champagne in France is well known for it's sparkling wines, California also produces high quality sparkling wine. It is illegal to place the name Champagne on a bottle of sparkling wine from anywhere in the world except Champagne, France even though common usage in the U.S.A. refer to all sparkling wines as Champagne.

During the current recessionary economy, agriculture property remains a premium investment. In high-name recognition Napa Valley, some vineyards sell for as much as $250,000 per acre. How does one go about evaluating an existing vineyard as an investment for purchase?

A vineyard investment requires diligent evaluation of many factors. The most obvious would be any risks to the longevity and productivity of the vineyard such as pests and diseases. For example, a vineyard on AXR rootstock would be vulnerable to the root louse Phylloxera B. Vineyards near the Napa River or springs could be vulnerable to Pierce's Disease bacterium. In the case of a young vineyard, there are latent virus disorders that could be carried by the rootstock or scion-wood which could be unknown to even the seller and manifest years later.

A major issue to examine before purchasing an existing vineyard has to do with the market value of different varieties. Does the vineyard production really pay all the bills? Is there enough gross income or cash flow to pay for the direct annual farming costs $3-$4000 per acre per year and the $3-$4000 cost per acre per year of money (capital). It can be seen that if an unpopular variety is planted (if there are such things anymore) that only sells for $1000 per ton and production is only 3-4 tons per acre, the insufficient cash flow may dictate the replanting or redevelopment of the vineyard. A related problem would be having the wrong variety planted for the soils and climate which could bring less than top-dollar on the market.

Does the variety match the location?

A potential vineyard buyer needs to determine whether the variety planted is appropriate to the soils and climate of the site. If you get the wrong variety on a site, no amount of fine tuning will offset the fundamental fact that that vineyard will not produce the highest quality grape. For example, Chardonnay growing north of Rutherford would produce an acceptable wine but because of the warmer climate compared to the Carneros area a red variety would be more appropriate. Another example might be a vineyard located on a heavy textured (clay) soil near the Napa River would not be suitable for concentrated red wine varities. In fact, the vines might be so vigorous that the wines produced could have herbacious, weedy flavor unless it was rigorously leafed and trellised.

Another important consideration is whether the vineyard has been managed in a state-of-the-art manner. Viticultural knowledge has progressed by leaps just in the last few years. Have the previous owners used the new methods or have they cut corners? For example, many old vineyards were planted with bud-wood from virused sources that might include leaf-roll, or grape fan-leaf virus that delay maturity and cut productivity. The vineyard may have been established on an overly vigorous rootstock for the site and the grapes may contain undesirable characteristics. If rootstock and variety are mismatched for the climate, the vines may set fruit poorly in seasons with cool-bloom periods as is the case with Merlot grafted to St. George rootstock.

Count the vines and verify their variety

Another important consideration for any potential vineyard buyers would be to confirm the actual planted acres. We do this by counting the vines and dividing the total by the vines per acre at the vineyard spacing. For example: a vineyard planted 8' between rows and 6' between vines is equivalent to 907 vines per acre (VPA). This way we can determine net vine-acres.

It is often a surprise that even if every space is planted, the actual vine-acres rarely exceeds 90% of the gross acres because of the need for turn-spaces, avenues and loading sites. On hillsides, it can drop as low as 80% due to erosion control measures and other reasons. Often disease or pests over a couple of decades may reduce the population of vines by an additional 10%-20%. It would be desirable to have a 'passenger in every seat,' and the precise count of healthy vines in a vineyard is an important item to verify before any purchase.

It's is important to confirm the varieties and rootstock as reported by the seller's disclosures. Don't assume that the seller necessarily knows for certain. Many old vineyards were blends of different varieties in the same field. Also, it's possible to have mix-ups of plants from nurseries despite the certification tags supplied. I heard of a vineyard that, because of simple human error, had 40% of the wrong variety supplied by a nursery and that fact was only discovered after the vines began growing in the spring.

Rootstock is more difficult to verify because there are no leaves produced from the rootstock. There is a serological test similar to DNA analysis that can type a root-stock. But this is not something you're going walk out into a field and establish. It depends on the level of due diligence the buyer is willing to perform.

Run your own tests

It would be useful for a potential buyer to have an examination of the soil profile in order to determine the presence of poor drainage, root diseases such as oak-root fungus or pests such as nematodes or phylloxera. In addition determining the soil depth and texture is useful for establishing whether the variety and rootstock are appropriate for the site especially if redevelopment is indicated.

Testing and evaluation of the soil and irrigation water chemistry is mandatory. I recently examined a new well and found Boron levels exceeding 2.0 ppm which can be fatal to vines if used for prolonged periods.

Talk to the winemakers

A final step which may be appropriate would be to interview the winemakers who have worked with the grapes to determine what product line the grapes were used for. For example, if the grapes are used for a Reserve vs. a generic wine the vineyard would be all the more valuable.

Remember, there is no such thing as a perfect vineyard. Some defects can be mitigated but the soil and climate are not ours to change. An existing vineyard can be evaluated based on the health of the vines and the wines it has produced and the job of a buyer is to verify those facts. Once the facts are established, it is then possible to comprehend a site's potential and make a rational, well informed purchase decision.

Richard Nagaoka is a viticultural consultant based in St. Helena, California. He has worked for over 30 years in the vineyards of California and grew up on a family farm in Lodi. Richard consults with industry professionals on acquisitions, evaluations, site development and vineyard redevelopment. If you're thinking about buying or replanting a vineyard, you can call him at (707) 963-5955 or visit his website at http://grapedoctor.com for help.

Retrieved from "https://eagle-rock.org/w/index.php?title=Evaluating_an_Existing_Vineyard_for_Purchase_or_Redevelopment&oldid=11130"
Category:
This page was last edited on 22 August 2012, at 21:52.
Privacy policy
About eagle-rock.org
Disclaimers