Fundamental energies in the cosmos 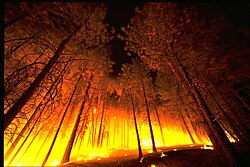 Fire
Fire is a physical phenomenon, but it is also an energy. Modern-day science has done away with the ancient concepts of the elements of air, fire, water and earth. However, fire as an energy must be understood on a level that physical science by definition can say nothing about.

This page is part of an ERW course: Energy and wheels of energy.
This article by John Eagles, June 4, 2006.

Scientists are unraveling the secrets behind the buildup of the physical cosmos. They find exact laws and principles, many of them difficult to comprehend, but always logical. The invisible part of the cosmos also obeys laws and principles. These principles are as exact as the laws of physics. Here i want to explain something about the fundamental energies of the cosmos.

In former articles i explained about the vertical dimension of the cosmos, the very axis of the universe, that binds God with man and with the creation. It is the axis ruled by love. God's love wants to express into God's creation of man and all things. The items on this axis, God - Heart - Mind - Body - Creation, relate as inner character and outer expression. God expresses God's love into the Heart of man and all other creation. The love in your heart expresses into thoughts of your mind, actions of your body and finally into created things.

All visible creations are made out of energy. Energy is not just energy. There are energies of many different kinds. In the physical world only some types of energy are distinguished. Any encyclopedia can tell you what they are. There are not so many of them. They are expressed energies, not really fundamental energies. These energies build the visible outer world only.

But there are many more energies in the universe that are not primarily physical of nature. To find out what the main energies are, we should know that man, man and woman, is a microcosm. This means that the creation man is the fullest expression of God's love. Man is created to have good dominion over the universe and in man all elements of the cosmos are present for that reason.

On the vertical axis we find God - Heart - Mind - Body - Creation. In your own body this axis is represented in the form of seven main chakras, i do sometimes call them switchwheels. The term switchwheel describes two functions of the chakra. Each chakra works as a switch for energy that runs through and is in the chakra, and the chakra works as a wheel. The energy in a chakra turns like a wheel and the energy in a chakra makes things run in you just like a turning wheel brings forward movement.

The human body is in one aspect part of creation, in another aspect it is enabling the mind to work through it. All of creation, including the creation 'human body' insofar the body's creation aspect is concerned, are built from four energies. The wise people from the past knew them as four elements. These are air, fire, water and earth. Now be clear that with air is not meant the air you breathe, and fire is not a fire you see burning, and water is not the water you drink and earth is not the Earth on that you stand. Here are meant the elements or energies air, fire, water and earth. The energy air builds air. The energy fire makes heat and fire. The energy water makes water and the energy earth comes out from the Earth. Just like you could not understand love from only considering a physical body, so you cannot understand these fundamental energies by only looking at the structure of the cosmos in terms of atoms and molecules.

These seven energies are found in the seven chakras in your body and these energies also form the vertical dimension of the entire cosmos. I'll list them here for you, also giving you names for the seven chakras. Sometimes you find other names for chakras, but usually those familiar with chakras distinguish seven main ones.

Please note that this list wasn't derived from categorizing content of books, but it is based on my own experiences with these energies.

Retrieved from "https://eagle-rock.org/w/index.php?title=Fundamental_energies_in_the_cosmos&oldid=8177"
Categories:
This page was last edited on 18 March 2012, at 17:02.
Privacy policy
About eagle-rock.org
Disclaimers