Merlot: The most forgiving of the Bordeaux red grapes

Merlot is probably the best example of a wine that came from relative obscurity to skyrocketing popularity virtually overnight. Merlot's tannins are softer and flavors are subtle, not as dramatic as Cabernet but it's such an easily approachable wine, ready to drink much earlier than Cabernet, that consumers have made it one of the most popular red varietals.

Merlot was first reported in America after 1895 but disappeared during Prohibition (1920-1933). It began to reappear after the late 1960s to mid-1970s. Merlot's meteoric popularity is due to a number of reasons. First of all, Merlot makes a softer red wine than Cabernet and historically, as we discussed in an earlier column, Merlot is one of the five classic varieties grown in Bordeaux for blending with Cabernet. In cool years when Cabernet would not mature, Merlot usually could produce sufficient sugars to make acceptable wines since Merlot blooms and flowers earlier than Cab and matures 1-3 weeks earlier. Vintners learned that by blending Merlot with less than perfect Cabs they could still make acceptable wine.

Merlot was considered a minor variety in Bordeaux in the 19th Century because of it's tendency to shatter (abort the berries). The shatter problem was mitigated after the introduction of the new rootstocks. Today Merlot is the most widely planted variety in Bordeaux.

Additional reasons for the popularity of Merlot

A second reason for the popularity of Merlot has to do with the watershed '60 Minutes' telecast describing the 'French Wine Paradox.' 'French Paradox' refers to the proposition that while the French consume more high cholesterol they generally have lower heart disease. The paradox has been correlated to the fact that the French consume much more red wine than Americans. The '60 Minutes' broadcast caused a dramatic, virtually overnight, increase in red wine consumption. As this period coincided with the demise of many North Coast Cabernet vineyards, during the early 1990s there was an acute shortage of available red wine on the market. Since Merlot is virtually ready to drink soon after bottling, it was Merlot that helped fill the pipeline while demand was high for red wine and stocks were low. 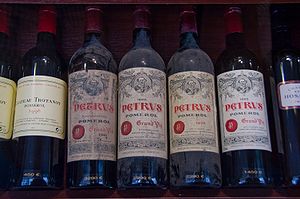 When Jackie Kennedy served Chateau Petrus at White House functions it introduced Americans to the charms of Merlot, the dominant variety in Petrus Estate Wines

A third reason for Merlot's popularity was the fondness that Jackie Kennedy had for Chateaux Petrus in Bordeaux. The First Lady served Merlot during state functions and thanks partly to her influence during the Kennedy administration the price of Petrus skyrocketed to $1500 per case. In the 1960s, those were big bucks, still are. My opinion is that Jackie Kennedy was instrumental in popularizing this variety.

My recollection is that the in the 1970s it was Louis Martini and Inglenook that some of the vintners who bottled Merlot. However, I think the winery that really helped put Merlot on the map was Duckhorn Vineyards in St. Helena. Merlot was not a hot variety in the late 1970s although it was available. There's an interesting story that illustrates the difficulty of judging consumer's taste as it pertains to wine. Early in the 1970s there was a little liquor store in Stockton that was selling out it's stock of Duckhorn Merlot every week. When Dan Duckhorn went to investigate why this foggy valley town was so fond of his Merlot, he found that the duck hunters of Stockton delta identified with the picture of the duck on the label and were buying it partly for that reason. It also turns out that Merlot goes well served with duck. So go figure.

Merlot is about the forgiving red variety I can think of in terms of climate and soil. It grows well in clay soils, producing a soft supple wine and it does superb in the drier, rocky, cobbly soils favored by Cabernet producing a more concentrated, luscious berry. A good example would be Whitehall Lane, Leonardini Vineyard located east of the Harvest Inn in St. Helena on what appears to be a gravel quarry fan off of Sulfur Springs Road. Other hot Merlots include Newton, Coppola, Shafter, Forman, Truchard.

I prefer Merlots from the cooler Climactic Regions I - III, but it is widely grown in Climatic Regions IV-V in Lodi, Modesto as well and, believe it or not, Franzia engaged long term contracts for Merlot grown in Bakersfield.

Super premium Merlots are grown on similar trellis and spacing as Cabernet but because of their large cluster size and huge leaves benefit even more from good sunlight penetration hence proper leafing and shoot positioning. Merlots are also more forgiving of ample irrigation water but perform well on arid to humid soil conditions.

As with other varieties, check out the clones. During the 1970s-1980s the most popular Merlot clones were University of California at Davis (UCD) Clones #01 and #03 collected from the Inglenook Vineyard near Yountville and UCD #06 from the Louis Martini Monte Rosso Vineyard in Sonoma.

Other Merlots in the UCD collection included UCD #04 from Argentina, #08 from Concannon Vineyard in Livermore, #10 from Eustadt Germany, and #20 from Chili. Recently French collections have been introduced with great expectations. From Bordeaux, France come clone #s 181, 182, 342, 343 and 347. From Italy Rauscedo are #s 3, 12 & 18. Many of these are under exclusive distributorship in America from the French agency ENTAV-INRA. These are licensed for distribution only by Caldwell Nursery in Napa (707) 255-1294 and Sunridge Nursery in Bakersfield (661) 363-8463.

The average market price for Napa County Merlot grapes was $2,077 in 1998. Sonoma County grapes have been selling for perhaps 10%-20% less but there's plenty of room in the current market for ultra premium Merlots ($25-$40 per bottle). Tonnage that farmers can expect off the new high tech vineyards range from 4-8 tons per acre. The low range comes from Merlot's continuing tendency to shatter during adverse bloom time conditions i.e., rain or excessive heat or cold. A nickname growers have for Merlot is 'Merlittle' because of it's tendency set small crops.

Merlot is a popular grape that brings a good price for the farmer and is relatively straight forward to cultivate. There's a wide range of styles that are acceptable leaving plenty of room for distinctive, stylish wines. Consider planting Merlot if the site is too cool for Cabernet but too warm for Pinot Noir. California will get it's own Petrus one of these days.

Since the time this article was first published Merlot has suffered the ignominy of seeing it's popularity decline due to the ravings of a fictional wine lover in the movie Sideways[1]. Miles, played by Paul Giamatti, considers himself knowledgeable about great wines, even though his love life is a wreck, wine is the one love that's ever been faithful to him. Unfortunately, Miles deplores the popularity of Merlot, disdaining it as a grape for the ignorant masses. His rant on the subject is one of the most unforgettable parts of the movie.

Unfortunately for the wine industry, consumers are fickle enough to be swayed by pop-culture and the value of Merlot fruit declined dramatically as a result. This had an unfortunate effect on farmers who had planted vast acres of Merlot believing the trend would never end. Alas, that's showbiz.

MERLOT: Classic grape widely grown in the Bordeaux region of France and elsewhere. Recently found, by DNA analysis, to have derived from a Cabernet Franc x unknown variety yet to be determined. The red wine bears a resemblance to Cabernet Sauvignon wine, with which it is sometimes blended, but is usually not so intense, with softer tannins. Matures earlier than Cabernet Sauvignon, with mid-late ripening. Moderate cold-hardiness. In California it is a popular varietal on its own and also as a percentage constituent of the red wine blend resembling Bordeaux claret called "Meritage". It does extremely well in the state of Washington and shows great promise on Long Island, N.Y. Results in the Finger Lakes region of N.Y., where it ripens in early October, have been mixed due its relative lack of cold-hardiness and the fruit subject to bunch rots. Recently some have claimed that many of the labeled Chilean varietal wines are actually of the Carmenère variety. Other countries such as Argentina and New Zealand also seem to have a suitable climate for this variety. The vine has many alias names, such as Medoc Noir, Crabutet Noir, Bigney, Petit Merle and Vitraille.

Retrieved from "https://eagle-rock.org/w/index.php?title=Merlot&oldid=6136"
Categories:
This page was last edited on 5 February 2012, at 17:50.
Privacy policy
About eagle-rock.org
Disclaimers