Abraham and Isaac before the Sacrifice, Jan Victors, 1642

About 1000 BC, Urusalim was captured by David, founder of the joint kingdom of Israel and Judah, and became the Jewish kingdom's capital. In the earlier wandering years of the Israelites, their most sacred object, the Ark of the Covenant, was periodically moved about among several sanctuaries, but following David's capture of Urusalim, the Ark was moved to that city around 955 BC. The Ark was a portable shrine containing the two stone Tablets of the Law that the prophet Moses had received upon Mt. Sinai. David renamed his city Jerusalem, meaning 'City of Peace' in Hebrew, and chose Mt. Moriah[1] as the site of his future temple.

It was also considered to be the site where Abraham had built an altar on which he prepared to sacrifice his son Isaac. At this same site, the patriarch Jacob gathered stone from the altar upon which his father Isaac was to be sacrificed, and using this stone as a pillow spent the night sleeping upon the rock. Upon waking from a stunning visionary dream[2], Jacob anointed the stone pillow with oil he had received from heaven and the stone then sank deep into the earth, to become the foundation stone of the great temple that would later be built by Solomon. This hallowed site is known as Bethel, meaning "Gate or House of Heaven."

In modern translations of the Bible, the word Moriah is used only twice:

Cave of the Patriarchs, Hebron 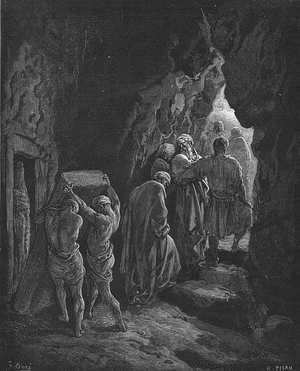 The cave and adjoining field were purchased by Abraham as a burial plot. Abraham, Isaac, Jacob, Sarah, Rebecca, and Leah, considered the Patriarchs and Matriarchs of the Jewish people, are all believed to be buried there. The only matriarch missing is Rachel, who is believed to be buried near Bethlehem where she died in childbirth.

Abraham purchases the cave as a burial place for Sarah

Sarah the wife of Abraham died while he was away tending to business. When Abraham came to mourn for her he spoke to the "sons of Heth" and asked them to sell him a burying place and they offered him his choice of their sepulchres. Abraham decided on the cave of Machpelah and purchased the site from Ephron the Hittite. Abraham requested also to purchase the adjoining field and a price was agreed on.

Abraham agreed to Ephron’s terms and weighed out for him the price he had named in the hearing of the Hittites: four hundred shekels of silver, according to the weight current among the merchants.[1]

There is a Jewish tradition, that besides the three biblical couples mentioned above, that Adam and Eve were buried there also. (Zohar, Ruth 96)

According to the Midrash, the Patriarchs were buried in the cave because the cave is the threshold to the Garden of Eden. The Patriarchs are said not to be dead but "sleeping". They rise to beg mercy for their children throughout the generations. According to the Zohar,[41] this tomb is the gateway through which souls enter into Gan Eden, heaven.

Retrieved from "https://eagle-rock.org/w/index.php?title=Research_page:Israel_sacred_sites&oldid=12954"
Category:
This page was last edited on 4 November 2014, at 06:13.
Privacy policy
About eagle-rock.org
Disclaimers