This is a lake near the top of the highest mountain on the Korean peninsula and Manchuria.

The lake and mountain top are considered sacred. I learned about this mountain from an ancient Korean king who once united all the tribes on the peninsula ca. 8000 years ago (of course, he's in spirit world now, his name is Chin Yang). For them this mountain was the center and origin of Korea and connected to 12 other sacred places, one of them being Chung Pyung.[1]

A large crater lake, called Heaven Lake (Korean:천지, Chinese:天池), is located within the caldera atop the mountain.

The Baekdu Mountain has been worshipped by the surrounding peoples throughout history. Both the Koreans and Manchus (an ethnic group in China) consider it the place of their ancestral origin. 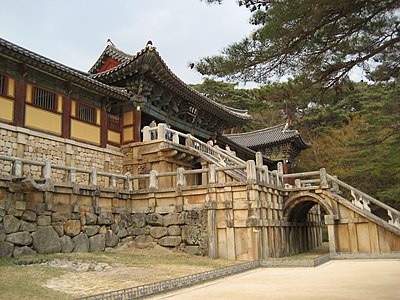 Bulguksa is a head temple of the Jogye Order of Korean Buddhism in the North Gyeongsang province in South Korea. It is home to seven National treasures of South Korea, including Dabotap and Seokgatap stone pagodas, Cheongun-gyo (Blue Cloud Bridge), and two gilt-bronze statues of Buddha. The temple is classified as Historic and Scenic Site No. 1 by the South Korean government. In 1995, Bulguksa was added to the UNESCO World Heritage List together with the Seokguram Grotto, which lies four kilometers to the east. The temple is considered as a masterpiece of the golden age of Buddhist art in the Silla kingdom. It is currently the head temple of the 11th district of the Jogye Order of Korean Buddhism.[2]

The building of this tower may mark a transition from the power of shamans over Korean royalty (specifically: Kingdom of Silla royalty) to a more rational approach, allowing the people to get more influence. (JE) 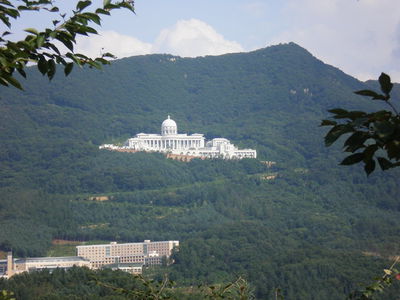 "Cheongpyeong is a small town about 1 hour east of Seoul, South Korea... It is a popular destination for Koreans, especially in summer, as it is on a beautiful lake with dramatic mountains immediately surrounding it, populated by resorts focusing particularly on water sports. A retreat nearby taking the name of the town, Cheongpyeong is also the most well-known holy ground of Sun Myung Moon's Unification Church in Korea. Many members of the Unification Church make journeys there on occasion, to attend workshops of spiritual healing and physical exertion at the 10,000 person capacity "Cheongpyeong Heaven and Earth Training Center." The workshops are led by a medium who members believe channels the spirit of Moon's mother-in-law, Soon Ae Hong (who members know by the title Dae Mo Nim, which means "Exalted Mother")." [4] 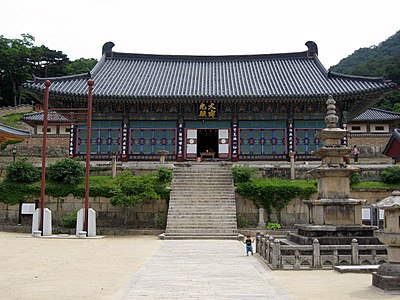 Haeinsa (해인사, 海印寺: Temple of Reflection on a Smooth Sea) is a head temple of the Jogye Order (대한불교조계종, 大韓佛敎 曹溪宗) of Korean Buddhism in the Gaya Mountains (가야산, 伽倻山), South Gyeongsang Province South Korea. Haeinsa is most notable for being the home of the Tripitaka Koreana, the whole of the Buddhist Scriptures carved onto 81,258 wooden printing blocks, which it has housed since 1398.

Haeinsa is one of the Three Jewel Temples of Korea, and represents Dharma or the Buddha’s teachings. It is still an active Seon (선, 禪) practice center in modern times, and was the home temple of the influential Rev. Seongcheol (성철, 性徹) , who died in 1993.[5] 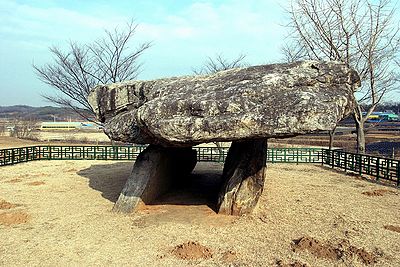 "Ganghwa-do is a County of Incheon City and Korea's fifth-largest island... It sits right at the mouth of the Han River... Due to its strategic location it was the site of a prehistoric civilization and great events in two different parts of Korea's history, and has been the site of several nationalistic religious cults; therefore there are many historical relics and significant cultural sites on this beautiful island..."[6]

The Complex of Goguryeo Tombs (Complex of Koguryo Tombs) lie in North Korea. In July 2004, they became the first UNESCO World Heritage site in the country. The site consists of 30 individual tombs from the later Goguryeo kingdom, one of Three Kingdoms of Korea, located in the cities of P'yŏngyang and Namp'o. Goguryeo was one of the strongest Korean kingdoms in the north east of China and the Korean Peninsula from 37 BCE to the 7th century CE. The kingdom was founded in the present day area of Northern Korea, and part of Manchuria around 37 BCE, and the capital was transferred to P'yŏngyang in 427 CE.[7] 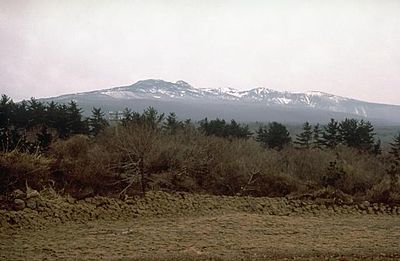 The mountain is home to Gwaneumsa, the oldest Buddhist temple on the island. The temple was originally built during the Goryeo Dynasty. Like many other temples in Korea, Gwaneumsa was destroyed and rebuilt in the 20th century. There is a memorial site outside the temple, remembering the victims of the Jeju uprising that took place between 1948 and 1950. It is one of the most visited places of the island.[8]

"Inwangsan is a mountain with a height of 338 meters, located in ... Seoul, South Korea. The name literally means "mountain of generous king" in Korean. Inwangsan is famous for its view, so many painters depicted the mountain in their works such as Jeong Seon's Inwang jesaekdo. The Fortress Wall of Seoul surrounds the mountain in which Inwangsa temple and Guksadang shrine are located as well."[9]

Jirisan is a mountain in the southern region of South Korea. It is often considered one of the three most important mountains in South Korea (the mainland highest point), with Hallasan and Seoraksan being the other two. The mountain rises to 1915 metres above sea level and is located in a designated national park of the same name. Jirisan National Park spans three provinces: North, South Jeolla and South Gyeongsang and is the largest in Korea. The largest proportion of the national park is in the province of South Gyeongsang. The highest peak of the mountain, Cheonhwangbong is also located in this province. Another well-known peak is Samshin-bong (Three Spirits Peak).

Jirisan is considered the southern end of the Sobaek mountain range, and therefore also the southern end of the Baekdudaegan mountain range, the "spine" of the Korean Peninsula incorporating the Sobaek mountain range and most of the Taebaek mountain range. There are seven Buddhist temples on Jirisan that are considered major Buddhist temples. Hwaeomsa is the largest and best-known temple among these, and contains a number of national treasures (mostly stone artworks from about 600–900 CE). The mountain is also home to the Cheonghak-dong (Azure Crane Village) alpine valley, which includes the Samseong-gung (Three Sages Palace), which is a recently-developed site to celebrate one of Korea's foundation myths.[10] 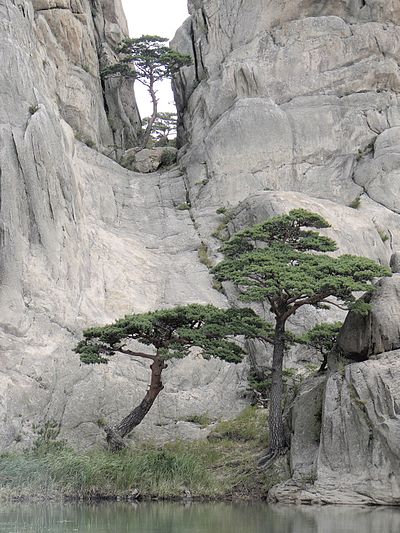 Kŭmgangsan (Korean pronunciation: [kɯmɡaŋsan]) or Mount Kŭmgang is one of the best-known mountains in North Korea.[1] It has a height of 1638 metres and is located on the east coast of the country, in Kŭmgangsan Tourist Region, formerly part of Kangwŏn Province (38.58N, 128.17E). Kŭmgangsan is part of the Taebaek mountain range which runs along the east of the Korean peninsula. The name means Diamond Mountain.

There are many old temples around Kŭmgangsan, some in poor condition. Among the best known are Changan-sa and Maha-yon.[11]

"Kuwŏlsan is a mountain in South Hwanghae, North Korea. The mountain takes its name from the ninth month of the lunar calendar, because it is considered particularly attractive in that month. The mountain is a major summer resort in North Korea, attracting many domestic tourists. The highest peak of the mountain is 954 m above sea level; this is the highest point in the short Kuwol range."[12]

"It is strongly associated with the myth of Korea's founding-king Dan-gun, and is considered by many the mountain at which that divine sovereign retired as a Sanshin mountain-spirit. There are a few major Buddhist temples around its slopes, but the most famous cultural asset they're is the Samseong-sa [Three Saints Shrine] complex, devoted to the three holy sages central to that story..."[13] 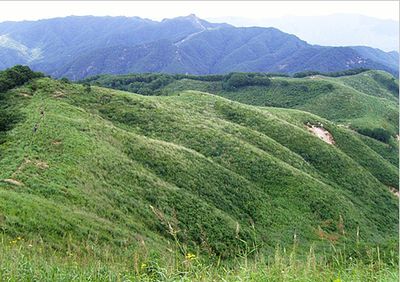 Myeongseongsan is a mountain in South Korea. Its area extends across the city of Pocheon, Gyeonggi-do and Cheorwon County, Gangwon-do. It has an elevation of 922.6 m (3,027 ft).[14]

Myeongseong is a mountain near Seoul with historic ghosts. This was the location of the last stand of Gung Ye, the ruler of a short-lived Korean kingdom (901-918) who died while fighting to protect his state from crumbling.

Born as a member of the Silla royal family, at one point he was a captive of the founder of the Goryeo Dynasty, which ruled Korea from the 10th to 14th centuries.

Gung Ye eventually made himself a king in 901 and named his state Later Goguryeo. But Wang Geon, the founder of Goryeo, tracked him to this mountain after Gung Ye lost a major battle. Legend has it that the sound of Gung Ye lamenting his defeat was heard across the mountain. 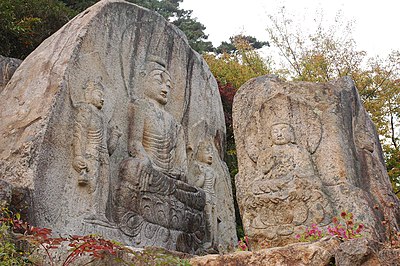 Namsan (남산, "South Mountain") is a 494-meter peak in the heart of Gyeongju National Park, just south of Gyeongju, South Korea. The mountain is within easy reach from the city and attracts a large number of national tourists. Namsan covers an area of about 8 km (north-south) by 12 km (east-west). Some 180 peaks are counted, of which Geumobong (468 m) and Gouibong (495 m) are the best-known. There are about 40 valleys.

Namsan is home to many remains from the Silla period, including some tombs of Silla rulers. There are hundreds of remains scattered around the mountain. Poseokjeong is one of the most famous of these sites, lying at the foot of Namsan. Other remains include Korean Buddhist art, sculptures, about 80 carved reliefs, about 60 stone pagodas and remains of about 100 temples and palaces mostly built between the 7th and 10th century. 12 of these relicts are designated national treasures.[15] 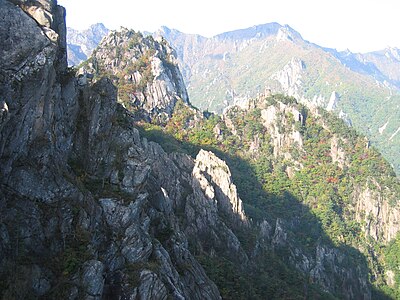 Seoraksan is the highest mountain in the Taebaek mountain range (태백산맥) in the Gangwon province in eastern South Korea. It is located in a national park near the city of Sokcho. After the Hallasan volcano on Jeju Island and Jirisan in the south, Seoraksan is the third highest mountain in South Korea. The Daechongbong Peak (대청봉) of Seoraksan reaches 1,708 metres (5,603 feet). The Taebaek mountain chain is often considered the backbone of the Korean peninsula.

According to the legend Ulsanbawi comes from the city of Ulsan in the south east of Korea. As Kumgangsan (금강산) was built, Ulsanbawi walked to the north as the representative of the city. Unfortunately Ulsanbawi arrived too late and there was no more room. Ulsanbawi was ashamed and slowly trudged back to the south. One evening the rock went to sleep in the Seorak area. Ulsanbawi felt it was so beautiful around there that it decided to stay for good.[16] Coordinates: 37° 45′ 0″ N, 128° 29′ 0″ E

Mission of Korea and meaning of sacred sites

Retrieved from "https://eagle-rock.org/w/index.php?title=Research_page:Korean_sacred_sites&oldid=9261"
Category:
This page was last edited on 20 May 2012, at 07:36.
Privacy policy
About eagle-rock.org
Disclaimers