The question we're asked most frequently is: "What is the cost to develop a vineyard?"

The short answer is: "That depends on what kind of soil you have, which variety you'll be planting and what style of wine you want to make.

1987 and '88 were short crop years followed by a period of increased consumption. In addition, phylloxera [1] began to decimate Napa vineyards planted on AXR rootstock [2]. It became apparent that higher yields were demanded from our limited acreage. So as to not sacrifice quality, the number of vines per acre was increased. We began to think of bottles per vine instead of tons per acre. The outcome was that the closer spaced vineyards could and did increase yields per acre. The amount of increase varied enormously by vineyard and variety. Nonetheless, in the late 1990s, common spacing formulas populate as many as 1000 to 1800 vines per acre depending on the variety and the site.

VSP trained rows resemble tall hedges. The shoots are positioned in between the trellis wires which are spaced from 10" to 18" apart and the shoots grow in between these wires on 4" to 6" cross arms like rungs on a ladder. They're often 'hedged' to maintain their shape so you can think about these 'hedge-rows' of grape vine leaves like sails collecting sun instead of wind.

The VSP systems help separate the fruit and the shoots giving the cluster zone more exposure to sunlight. This system, however, requires the removal of leaves and positioning of the shoots by hand and is thus very labor intensive. One disadvantage is that VSPs are prone to shade if the rows are oriented east by west. These VSPs are considered the ultimate in successful canopy management. The canopy is manicured manually and the clusters are well exposed for ventilation which guards against bunch rot (Botrytis cinerea)[[3]] and generally opens the cluster environment for even sunlight penetration. 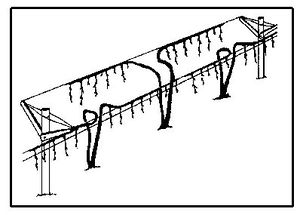 A parallel revolution occurred when the traditional vineyards whose limited trellis systems created a leafy jungle often referred to as "California Sprawl" were retro-fitted into Geneva Double Curtain (GDC) or "Open Lyre" systems to improve the canopy environment like the VSPs. They simply took one row and divided it into two separate canopies achieving similar results but with fewer vines per acre but more elaborate mechanical infrastructure.

The GDC and Lyre were most popular on vineyards growing on very deep, fertile soils and were employed to tame the jungles experienced with traditional systems.

Thanks to new trellising methods, it is now possible to develop vineyards with as many as 1800 vines per acre. Obviously, the cost of vineyard development will vary depending on the number of vines. For example, a traditional vineyard has only 566 dormant cabernet bench grafts on 11' x 7' spacing, however, a VSP on 6' x 4' spacing has 1815 vines per acre which is almost 300% more. The cost of a dormant bench graft is approximately $3.35 so you can see that there is a significant cost increase for the plants alone.

Add to that, the proportionally greater number of stakes, cross-arms, drip emitters and other material, not to mention labor, you see a significant increase in up-front expenses. Furthermore, there are increased annual direct farm costs. For example, 6' row spacing, when compared to 11' almost doubles the number of trips per acre on a tractor for all cultural and pest control operations.

So how much do these vineyards cost to develop? The table below summarizes the population, trellis, development, operating and financing costs from a study compiled by Motto, Kryla & Fischer, a St. Helena based wine industry consulting firm. 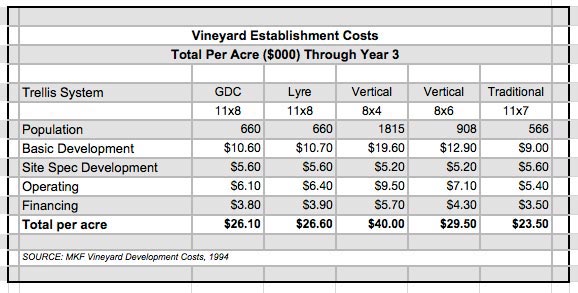 Mike Fischer reports that an updated study will be published this summer but the costs are only slightly higher than in 1994 due to increased labor costs.

As you can see, cost to develop a vineyard are not for the faint of heart. Basic costs are incurred in a typical replanting with all infrastructure in place. These basic costs include land preparation, planting, trellis and drip irrigation. The site specific costs include drain tile, water supply and frost protection and may include erosion control, terracing, fencing, etc. The development costs above do not include the price of land but do include property taxes on a land value of $20,000 per acre. Financing assumes a 100% of cash required at 9% interest.

Remember, the factors that dictate the appropriate vine spacing and trellis system will always be site specific and should be determined with the help of vineyard professionals.

Retrieved from "https://eagle-rock.org/w/index.php?title=Vineyard_Development_Costs&oldid=10094"
Category:
This page was last edited on 13 June 2012, at 23:54.
Privacy policy
About eagle-rock.org
Disclaimers