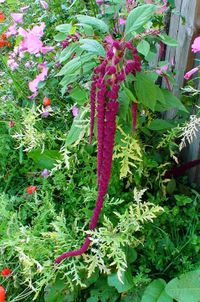 This plant came from a seed mix of 'red and pink flowers.' I did not know what it was at first. It's an interesting plant that is also known as 'kiwicha.' It had been grown for thousands of years by the Incas. The seeds are very high in protein. It is grown for its seeds in Peru, Bolivia, Argentina and in the Himalaya. [1] [2]

These seeds are one of the most nutritious foods grown. Not only are they richer in protein than the major cereals, but the amino acid balance of their protein comes closer to nutritional perfection for the human diet than that in normal cereal grains. Five hundred years ago kiwicha helped feed the Incas. After the conquest it was nearly forgotten." - [3]

Retrieved from "https://eagle-rock.org/w/index.php?title=Amaranthus_caudatus&oldid=13212"
Categories:
This page was last edited on 12 June 2015, at 19:08.
Privacy policy
About eagle-rock.org
Disclaimers