Are spirit and mind the same 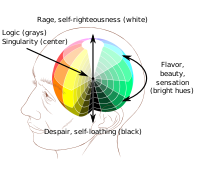 Some people believe that the mind is located in the brain, but i don't believe that it is that simple. I rather see the whole body as an instrument of the mind. .

How do you make something with spiritual value, something that actually exists in the spiritual world? Imagine that you make a painting or a chair or a musical composition, any creation. When you only make it rather mechanically, you just make a physical thing. But when you add extra love, extra effort, extra beauty to your creation, you also create a spiritual thing. This is not only a way of speaking. The spiritual world does really exist, is a world that runs parallel to the physical world, but is also intricately connected.

The difficulty in describing the spiritual world lies partly in the fact that many people have little or no experience with the spiritual world. We all are influenced by the spiritual reality and we all relate to it, but very often people are rather unaware of this. How to describe a reality that many haven't seen and that also is very complex?

Some people have a more conscious relation to the spiritual world. For example, some mediums can allow spirits to make use of their body. Shamans in some cultures speak to spirits of ancestors. Many religions speak of a life after death. In all these cases, there is an awareness of the spiritual reality.

Some people had near-death experiences. They usually report that their spirit left their body, they saw their own body lying, sometimes moved through some kind of tunnel or met other spiritual beings. The spirit self can exist independent from the physical self. This is not possible for the mind. The spirit can leave the body, but the mind cannot.

The spiritual and the physical form a duality like for example males and females. Mind and body also form a duality, but this duality is of a different nature, because mind and body cannot be separated as independent entities. The mind is always in the body. The mind is the instrument with the functions of planning, thinking and feeling. You cannot locate the mind in one part of the body. The mind permeates the entire body. Some people believe that the mind is located in the brain, but i don't believe that it is that simple. I rather see the whole body as an instrument of the mind. The brain definitely is necessary for the mind to function, but also the rest of your body plays a role. For example, the brain is connected to the rest of the body through the nervous system and is also steered by chemical signals from the hormones. The production of hormones again can be triggered by what we see, for example in the case of danger or sexual stimuli.

I cannot simply prove that what i explained above is true. I do know that this set of concepts works for myself to understand my own experiences in the spiritual and physical worlds.

Both the spiritual world and the physical world are made of energy. The physical world can be seen as energies that have condensed more than the energies in the spiritual world. Energies do influence our bodies, but they work more directly on our mind. When i speak about energies, don't only think of the energies known and described by the science of physics, but also think of energies of the kind that make us feel fit and strong and healthy. Such energies are quite directly influenced by the mind.

For example, when you have ideals and vision for your own future, you rather likely have energy to fulfill your dreams. These energies are not just the result of food that you digested and air that you inhaled. Sometimes you can feel new energy as a result of respectful words spoken to you. This shows that there exist energies on another level than described in the physical reality. These kinds of energies can be influenced by the mind.

Retrieved from "https://eagle-rock.org/w/index.php?title=Are_spirit_and_mind_the_same&oldid=14336"
Categories:
This page was last edited on 22 May 2019, at 13:38.
Privacy policy
About eagle-rock.org
Disclaimers