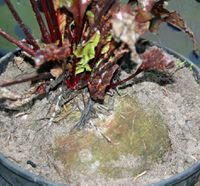 A normal beetroot plant. It grew very big (the diameter of the pot is 28 cm) and is kept in a pot in a greenhouse through winter, to plant out again in spring so it may flower and give seeds.

You can sow beetroot directly into the soil. It helps to put the seeds a few days in water to make them germinate faster. You can also sow beets in pots and then plant them out, but because beets have taproots you cannot keep them long in pots. Thin the beets at 15 cm in the row.

Beetroots need to grow in the full sun and don't tolerate shade.

They don't appreciate a lot of nitrogen fertilizer, so don't give them too much compost. However, they do like some potassium added.

Lettuce is a good companion plant for beetroot. 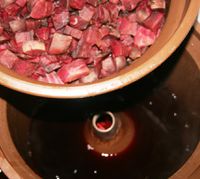 My beetroots are doing well this year. Today i harvested 10 beetroots weighing ca 1/2 kg each, and after steaming they gave ca 2 1/2 l juice. We'll add honey to the juice and pasteurize them in bottles.

Beetroot is a rich source of antioxidants and nutrients, including magnesium, potassium and vitamin C. It also contains betaine which is important for cardiovascular health.

Beetroot juice has been shown to lower blood pressure. The effect shows up within one hour after drinking half a liter of juice and remains measurable up to 24 hours. Beetroot juice also has positive effects on performances. Scientists found that cyclists who drank half a liter of beetroot juice several hours before cycling were able to ride up to 20 % longer.[1]

Retrieved from "https://eagle-rock.org/w/index.php?title=Beetroot&oldid=11245"
Categories:
This page was last edited on 9 September 2012, at 08:57.
Privacy policy
About eagle-rock.org
Disclaimers