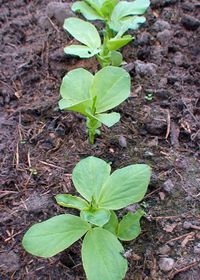 Fava bean plants in midwinter. These have been sown in autumn. Fava beans can withstand frost and these plants will give harvest in early spring.

Don't add manure to the soil but some old compost is ok, or sawdust to prevent the beans from rotting. Sow some dill in the same row, they protect against blackfly. Another method against blackfly is to pinch out the tops when the plant begins to blossom. You can stir-fry these tops and they are delicious.

Plant distance in the row 15 cm and between the rows 60 cm. Harvest is from mid June to July. You can grow lettuce between the beans when they are still small.

Fava beans grow in any soil but prefer rich loams. As a legume, they live in a symbiosis with Rhizobium, soil bacteria that fix nitrogen.

Broad beans are an old vegetable and were already eaten in the Mediterranean around 6000 BCE or earlier. Fava beans are often flavored with savory.

Retrieved from "https://eagle-rock.org/w/index.php?title=Fava_bean&oldid=10110"
Categories:
This page was last edited on 15 June 2012, at 08:26.
Privacy policy
About eagle-rock.org
Disclaimers