See also Garden Journal for a list with all plants with a garden journal section. 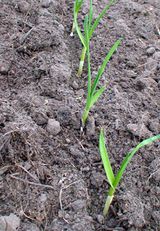 November 2011 - I planted this garlic from cloves. Here the plants are shown two months later. 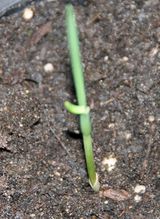 January 2012 - Garlic plant in greenhouse, grown from seed. Did also not grow very well after this. Climate too cold and in a greenhouse garlic doesn't grow as soon as the weather gets hotter.

February 17, 2012 - These are the plants that were planted in autumn, but after a strong period of frost, most of them died.

February 17, 2012 - The same plants, planted in November last year, but these ones survived in the greenhouse.

June 18, 2012 - Again one of the same plants that were planted in November last year. Almost all of them died in the frost, this is one of a few remaining but it did not grow very big.

September 9, 2012 - I've often tried to grow garlic, without much success. Garlic needs a long growing period and a warmer climate. In principle garlic can withstand frost in winter, but last year my garlic planted in late autumn froze to death in a very cold February.


This year i tried planting garlic in a soil enhanced with more than an average amount of compost. The garlic you see on the photo is only 10 weeks old and the biggest bulb is as large as the ones you buy in shops. The greens can still be consumed from these garlic plants. So it seems i found my way with garlic. Next year i'll plant them earlier, but also again in very rich soil to make them grow very fast.

Retrieved from "https://eagle-rock.org/w/index.php?title=Garlic&oldid=11250"
Categories:
This page was last edited on 9 September 2012, at 15:16.
Privacy policy
About eagle-rock.org
Disclaimers