Hillside Vineyards - Why they're desirable for premium grapes

In the 1990s there was a raging debate over the erosive effects of hillside vineyards in Napa and Sonoma Counties. One of the considerations that has come out is that hillsides are supposedly superior for growing grapes. Is that true?

Hillside vineyards have been regarded as producing wines of a distinctive style, particularly red wine grapes such as Cabernet Sauvignon and Zinfandel. These wines are associated with wines of intense flavor, heavy body, and deep color. In fact, we used to call some hillside wines as "too big" connoting that it would take years for them to mature but they were extremely distinctive particularly in competitive tasting. It's hard to forget a wine that is inky black with tannins that go on forever. Hillside wines inevitably stand out in competitive tastings. The fact is, few Cabernet and Zinfandel vineyards on the valley floor have been associated with this style of wine.

What is it about hillsides that makes them superior for vineyards? 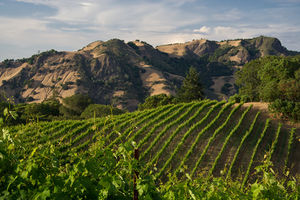 First of all, not all mountain vineyards are hillside vineyards. In fact some mountain vineyards grow on uplifts of deep alluvial soils that have characteristics similar to valley floor soils. What makes hillside vineyard soil quality so distinctive is that they are excessively well drained particularly the subsurface availability of soil moisture as well as the surface drainage.

Why is soil moisture so important?

Lower soil moisture reduces the vigor of the vine and causes smaller berries. Sunlight exposure is improved as in an auditorium with rows behind getting more direct solarradiation. In contrast, valley floor vineyards have been associated with high and sometimesexcessive vigor creating highly shaded canopies that seem to bring out the worst in some varieties especially Sauvignon Blanc. What you end up with are herbaceous, weedy, green bell-pepper flavors that are considered undesirable characteristics in wine.

White grapes are more forgiving than red wine grapes in the deeper soils. I rarely see Reserve Cabernets produced from vineyards growing on deep fertile soil such as those close to the Napa River. There are, on the other hand, a number of "benchmark" Cabernets that are grown on the valley floor but inevitably they're planted in soils that have rocky, cobbly soils characteristic of hillside vineyards.

For example, the Robert Mondavi Reserve Cabernet come from the To-kalon vineyards which are west of Highway 29 in a formation known as the Oakville Fan. These vineyards are similar to classic hillside type soils, cobbly and rocky with good drainage. Other examples includes the old Inglenook Estate, BV Private Reserve, Martha's Vineyard, and Freemark Abbey's Cabernet Boche. The vineyards that produce these wines are all grown on similar soils.

Another characteristic that makes hillsides desirable for growing grapes is the fact that hillside vineyards historically have been frost free. This is due to the fact that cold air drains off the slopes rather than settling in low-lying areas and causing frost damage. Also, the hillside vineyards benefit from the inversion layer known as the 'Banana Belt.' As warm air radiates off the valley floor it lifts from soils after sunset and forms a layer of air 2-3 degrees warmer than ground temperatures between 50-400 feet. That's why wind machines are suspended 50 feet high because the air is warmer at that height. The wind machines mix the warmer inversion layer with the colder air found closer to the ground and thus raises the overall temperature in the vineyard.

Only some varietals do well on hillsides

The style of all varieties are influenced by drainage features but it applies especially to reds such as Cabernet Sauvignon, Cabernet Franc, and with certain whites like Sauvignon Blanc. 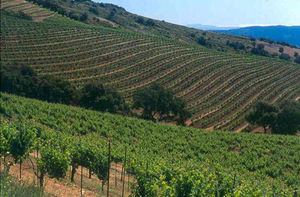 Controlling erosion is the big issue. When you till hillsides, you can get more particulate matter in the runoff and this has an impact throughout the drainage basin. If you get more silt in the Napa River that creates a problem.

The erosion formula is a function of the rainfall in terms of inches per hour and the slope of the vineyard. The greater the slope, the greater the resources needed to mitigate runoff. Those include cover crops, down spouts, culverts, interceptor drains. It's difficult to build vineyards or slopes over 30%, however, I've seen vineyards in the Rhine planted to 70% slope but that are doing well. It's important to remember that their rainfall patterns are different. In California we receive almost all our rain in the winter months.

I was involved in a Napa vineyard design on a 35% slope that is farmed up and down slope. We applied most of mitigation techniques I mentioned above and they've been successful in mitigating erosion. That particular vineyard is now producing $20-$40 bottles of wine.

Valley floor vineyards have produced remarkably structured wines for decades but the unique style of grape produced in the hillside vineyards cannot be denied.

Generally they're associated with lower yields, 2-4 tons per acre. Some hillside vineyards I know of are being redeveloped with new rootstock and denser spacing. It's hoped that yields will be improved without sacrificing the quality. But we're still waiting to find out.

Effect of restrictions on the industry

Great vintages can be grown on the valley floor. Some of the greatest are grown on the narrow volcanic alluvial fans the most famous of which are near Oakville and Rutherford. These "Benches" are small, transitional slopes between the mountains on the west and the flood plain towards the Napa River on the east.

The popular belief is that 20,000 of Napa's 35,000 vineyard acres are on the valley floor with the balance on the hillsides. The clay loams down by the Napa River produce a quality grape but they are less distinctive than many hillside grapes. Therefore, with less access to hillsides, there'll be fewer of these distinctive grapes. Richard welcomes comments, rejoinders or questions on this subject.

Retrieved from "https://eagle-rock.org/w/index.php?title=Hillside_Vineyards_-_Why_they%27re_desirable_for_premium_grapes&oldid=6422"
Categories:
This page was last edited on 10 February 2012, at 04:54.
Privacy policy
About eagle-rock.org
Disclaimers