History of Christianity 6 - Augustine of Hippo 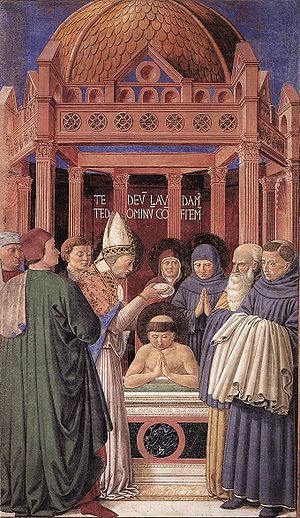 Summary: Christian monasticism began with hermits in the deserts of Egypt in the third century. They followed Augustine of Hippo, who lived from 354-430 and who was a significant figure in the development of Christianity. Augustine developed the concept of the Church as a spiritual City of God, distinct from the material Earthly City. His thoughts profoundly influenced the medieval worldview. Augustine's City of God was closely identified with the church, the community that worshiped God. Text of the video (PDF file)

Retrieved from "https://eagle-rock.org/w/index.php?title=History_of_Christianity_6_-_Augustine_of_Hippo&oldid=11773"
Categories:
This page was last edited on 6 December 2013, at 23:22.
Privacy policy
About eagle-rock.org
Disclaimers