History of Christianity 8 - The Great Schism 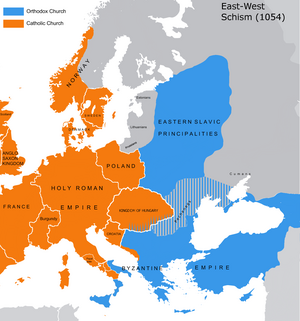 The religious distribution in 1054

Summary: The East–West Schism of 1054, sometimes known as the Great Schism, divided Christendom into Eastern (Greek) and Western (Latin) branches, which later became known as the Eastern Orthodox Church and the Roman Catholic Church, respectively. The Schism was the result of an extended period of tension and sometimes estrangement between then Latin and Greek Churches. The break became permanent after the sack of Byzantium Constantinople by Western Christians in 1204 during the Fourth Crusade.

Text of the video (PDF file)

Retrieved from "https://eagle-rock.org/w/index.php?title=History_of_Christianity_8_-_The_Great_Schism&oldid=11775"
Categories:
This page was last edited on 6 December 2013, at 23:23.
Privacy policy
About eagle-rock.org
Disclaimers