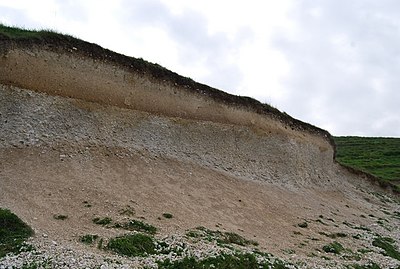 Calcareous Soil Profile, Seven Sisters Country Park - The top layer is dark humus. Below this a bleached horizon with leached out nutrients. Below that a darker reddish layer of redisposition. At the base the weathered bedrock (chalk). The unweathered chalk is hidden.

Humus is the part of organic matter in the soil that is resulting from decomposition of plant and animal residues. Humus has reached a point of stability and won't break down easily by microorganisms.

Organic matter is decomposed by animals (for example earth worms) and microorganisms in the soil. Most of these soil microorganisms need oxygen and they always need water. They work faster in higher temperatures. This means that within regions of similar moisture conditions, the organic matter content of soil decreases from north to south.

Tropical regions have very little or no humus in their soil. Along the Mississippi River, where soil moisture conditions remain rather similar from south to north, we might find 2 percent in Arkansas, 3 percent in Missouri and over 4 percent in Wisconsin. Hot desert soils have virtually no organic matter.[2]

Humus can also be made by humans. An example are the Terra preta soils that were made by tribes and cultures that flourished in the Amazon before the Spaniards came.

An environment where humus is formed

"Humus is the stable, long lasting remnant of decaying organic material. It improves soil structure and increases water retention. It's nutritive qualities include trace elements and several important organic acids but do not include nitrogen or phosphorus."[4]

"To a soil scientist, "humus" is the organic, non-cellular, long-lasting component of soil. It is organic because it is composed of chemicals containing carbon. It is mostly extremely stable carbon compounds with no phosphorus or nitrogen. Their stable form makes them difficult to break down by microorganisms. If humic compounds had N or P, micro-organisms would try harder to attack them, but since they don't, they aren't worth the effort. Humus is non-cellular because everything else in the cell breaks down and gets recycled into other organisms, leaving the humus in the soil but no longer within a cell. The term "humus" gets tossed around loosely by gardeners to mean the organic material that makes soil brownish, not all of which is humus. In nature, humus accumulates in soil because it lasts for hundreds or thousands of years."[4]

Prairies, or grassland in general, is an environment where much humus can be formed.

"In the strictest sense humus is made up of humic substances composed of Carbon, Oxygen, and Hydrogen. These include humic acids, fulvic acids, and humins. Some Nitrogen may be present but not in any significant quantity. Plants obtain those first three elements by means other than soil so "pure" humus has no significant nutritive value. Mature compost is not pure humus, it also contains carbohydrates, lipids, and amino acids, not to mention living organisms feeding on the remaining undecomposed or partially decomposed material (can't expect them to eat it all at once!). Many of these contain Nitrogen that is released gradually over time. Not all organic matter in compost will be at the same stage of decomposition at any given time."[4]

Humic acid[5] is a principal component of humic substances. It is not a single acid but a complex mixture of many different acids. Humic acids can form complexes with ions that are commonly found in soils creating humic colloids.[6]

Retrieved from "https://eagle-rock.org/w/index.php?title=Humus&oldid=11735"
Categories:
This page was last edited on 15 November 2013, at 18:23.
Privacy policy
About eagle-rock.org
Disclaimers