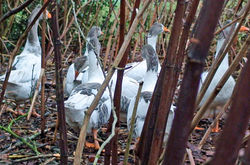 Geese and other animals fit in the method of mixed farming on a family farm.

A mixed farm (or integrated farm) is one where both crops and animals are cultivated and where crops are grown at least partly at the service of the livestock. A typical mixed farm would be one in which various animals are held, such as cows, goats, pigs, sheep, poultry. The manure is used to fertilize the land where all kinds of crops, grass, rye, wheat, turnips, legumes, etc. are grown. Many of these products are used for the family of the farmer but some would be sold at markets.

Modern agriculture is more and more becoming a large-scale business in which one farmer only has a dairy farm or only grows a few crops on big fields. For typical present-day dairy farms, mostly the only mixed element is that maize and grass silage are fed to the cattle.

While small-scale family farms have been the norm for agriculture throughout human history, in the present time farming is scaling up everywhere. Now much food is produced on farms that are managed like big enterprises with the help of the products and technologies provided by several forms of agribusiness.

In much of human history and in most developing nations today, farms were owned and operated by families. In many cases these had or have the form of mixed farms.

Almarai in Saudi Arabia exploits a dairy farm with over 70,000 cows while 110,000 are planned}} Wikipedia defines agribusiness as "a generic term for the various businesses involved in food production, including farming and contract farming, seed supply, agrichemicals, farm machinery, wholesale and distribution, processing, marketing, and retail sales."[1] Companies that are part of agribusiness produce agricultural machines and herbicides and pesticides and genetically modified seeds that have changed how agriculture is done around the world.

Modern forms of intensive farming produce livestock such as cattle and poultry in industrialized settings commonly referred to as factory farms.[2] Much of the world's poultry, beef and eggs are produced this way.

Self-sustenance and close relationship to nature

Organic farming[3] was the original type of agriculture and has been practiced around the world throughout history. In most cases this type of farming was done at family farms. Probably one of the oldest forms is forest gardening,[4] in which is made use of forests to grow fruit and nut trees and shrubs, herbs, vines and vegetables. Crops can be intermixed and grown in several layers, making use of companion planting and replicating a woodland habitat.

One of the pioneers of organic farming was Rudolf Steiner[5] who created biodynamic agriculture in Central Europe in the mid-1920s. Another pioneer was Albert Howard[6] who developed organic agriculture in England in the 1940s.

A more modern development is that of permaculture initiated by Bill Mollison and David Holmgren in the mid-1970s on Tasmania. Here's one definition of permaculture: The development of agricultural ecosystems intended to be sustainable and self-sufficient.

Ecovillages[7] are planned residential communities with the goal of becoming more socially, economically and ecologically sustainable. Ecovillage members are united by shared ecological, social-economic and cultural-spiritual values. An ecovillage is often composed of people who have chosen an alternative to centralized electrical, water, and sewage systems. Intentional communities are somewhat similar to mixed farms but they usually are managed by communities rather than one family.

Robert Gilman, one of the initiators of the ecovillage movement has defined an ecovillage as a "human-scale full-featured settlement in which human activities are harmlessly integrated into the natural world in a way that is supportive of healthy human development, and can be successfully continued into the indefinite future."[8]

The Global Ecovillage Network is a global association of people and communities of ecovillages. Network members share ideas and information, transfer technologies and develop cultural and educational exchanges.[9]

One of the pioneering ecovillages in the world is Findhorn Ecovillage.[10]

Retrieved from "https://eagle-rock.org/w/index.php?title=Mixed_farming&oldid=13954"
Categories:
This page was last edited on 21 March 2016, at 11:26.
Privacy policy
About eagle-rock.org
Disclaimers