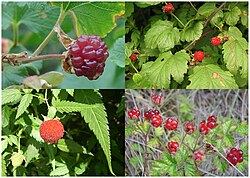 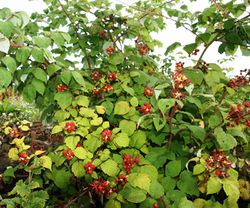 Raspberries go in two types: - One that gives harvest on branches that grew new during the year before. They give harvest around this time of the year. This type needs cutting away in autumn of all the branches that gave harvest during that year (old branches). The shoots that grew during that year will give harvest the next year. - The other one that gives harvest from July to October, and they grow on the branches that came out this year. You can prune them in two ways: cut all branches away in the autumn till 10 cm above ground, and you'll get a bigger harvest in October of the next year. Or you can only cut away the bigger branches but let the smaller stand. In that case you first get a harvest on these branches (around July) and a second harvest in October on the branches that grew this year.

The photo is from a raspberry bush in my garden and gives fruits in summer on one-year old branches.

Retrieved from "https://eagle-rock.org/w/index.php?title=Raspberry&oldid=10999"
Categories:
This page was last edited on 6 August 2012, at 18:31.
Privacy policy
About eagle-rock.org
Disclaimers