One of the biggest problems that is facing gardeners, farmers and eventually all humans is the rapid loss of old seed varieties. More and more what's being sold and available are hybrid seeds. Modern farmers and gardeners often use hybrid seeds and the seeds from these plants cannot be sown again to grow a new crop. Worldwide many farmers use seeds sold by companies such as Monsanto, and also these seeds cannot be sown out as Monsanto built in a so-called terminator gen which basically makes dead seeds. Those seeds can only be used as seed in the first generation of plants.

Many local farmers and indigenous tribes have traditionally relied on special species of vegetables and staple crops that were suitable for their land and weather circumstances and for which healthy local food recipes were developed.

Some organizations try to reverse this negative trend. You can buy or exchange seeds and plants with people around the world. I'll give two links here, one in the USA[1] and one in Europe (Austria)[2].

An experiment with hybrid seeds 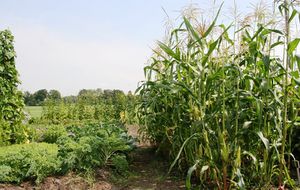 The photo shows a section of my garden with maize. This maize was sown from seeds harvested from plants that grew last year from hybrid seeds. I wanted to test how these hybrid plants would do in the second generation.

Hybrid seeds are produced from cross-pollinated plants. These parent plants are carefully selected for their good combining ability to produce seeds that give plants with highest yields, or with other desired qualities. When you use the seeds of the hybrid plants, you can't be sure what result you get.

In this case, the maize that grew from the harvested seeds of the hybrid plants was tall and healthy. The plants showed various characteristics in terms of the colors of their flowers. But the harvest was rather disappointing. Although they grew a normal quantity of ears, they remained smaller than usual.--JE September 2012 (PDT)

Retrieved from "https://eagle-rock.org/w/index.php?title=Seed_cultivation_and_saving&oldid=11383"
Categories:
This page was last edited on 22 September 2012, at 20:35.
Privacy policy
About eagle-rock.org
Disclaimers