Spiritual regions in a town - fundraising

This page is part of an ERW course, Principles of economic restoration.
By John Eagles, June 4, 2010

When you look with spiritual eyes at city of town, you can distinguish distinct spiritual regions. Often, but not always, these spiritual regions are separated by borders that are also visible in the physical world, borders such as highways, rivers, grassland etc.

In this note i'll try to explain more about it. The same knowledge about spiritual regions in a village, town or city can also be helpful when you go out witnessing from door to door or when you enter houses in a Home Church project.

Here is a drawing i made of an imaginary town divided into 8 regions. 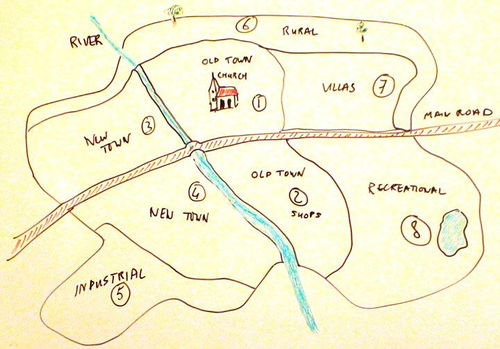 The regions in this town are not just neighborhoods as one would see in a normal map. They are regions that each have their distinct spiritual atmosphere or color.

About the spiritual regions:
When you look at neighborhoods in a town or city, you can distinguish areas that more or less have the same spiritual atmosphere. Spiritually looking, each area has a different feeling and color. The borders between these regions normally are quite distinct and hold over longer time.

How to determine the spiritual regions?
What i used to do before tackling a town in a fundraising project was to

How to approach the town as a whole in a fundraising or other project?

Here is an example from my own experience:
In one town i struggled and could not break through even after many days. I decided to move to another town. In that town i worked as described above. After several days i made victory in the central area with a big towering church. In spirit world, 12 spirits who were connected to that church became my friends and began to help me. Each day when i drove to that town to go out fundraising, i was welcomed at the border by those 12 spirits. They went ahead of me in the houses and prepared the people for buying my product. Once i had done that entire town, i returned to the first town and having a stronger foundation i could make victory there.

What i described here is based on a few examples only. There are many other interesting stories to tell about fundraising with the help of spirit world.

This method works. I can testify. It is a formidable tool of training for your own development.

Retrieved from "https://eagle-rock.org/w/index.php?title=Spiritual_regions_in_a_town_-_fundraising&oldid=14405"
Category:
This page was last edited on 29 May 2019, at 09:40.
Privacy policy
About eagle-rock.org
Disclaimers