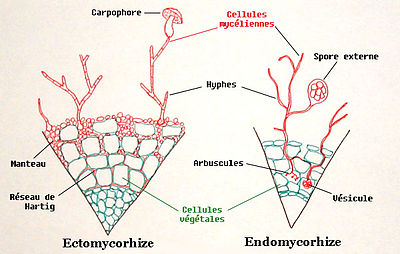 When we understand the intricate relationships that exist between plants on the one side and the air that we breathe, the soil on that we walk, we realize that the only good way of gardening is to do it organically. Almost all plants live in symbiotic harmony with organisms in the soil, such as bacteria and fungi. This article is about the association between plant roots and fungi, also called 'mycorrhiza.' Fungicides and chemical fertilizers can damage this natural association. Read this article and you understand why. --JE 01:43, 14 June 2012 (PDT)

A mycorrhiza[1] is a symbiotic (generally mutualistic, but occasionally weakly pathogenic) association between a fungus and the roots of a higher plant. In a mycorrhizal association, the fungus colonizes the host plant's roots, either intracellularly or extracellularly. They are an important component of soil life.[2]

Mycorrhiza literally means “fungus-root”. The hyphae or the microscopic filaments of a fungus penetrate the root of a plant. The hyphae form a network or mycelium in the soul around the root. This greatly increases the plant's ability to absorb water and minerals. The fungus shares water and minerals with the plant and the plant shares carbohydrates produced by photosynthesis with the fungus. Some plants are very dependent on the minerals they receive from the fungus, for example some plants are entirely dependent to receive phosphorous in this way.[3]

How many plants form mycorrhiza

The nutrients that are exchanged

The plants provide the fungus with carbohydrates, such as glucose and sucrose. These carbohydrates are produced through photosynthesis mainly in the leaves of plants and flow to the roots and from there to the fungi.

The fungi extend the root system of the plant and give access to more water and to several minerals.

Mycorrhizal fungi degrade organic matter directly and some pass on nitrogen, given to them by nitrogen fixing bacteria that live on these fungi, to their plant hosts in a form that these plants can use. This is how nutrient-poor sites can be colonized, for example by pines.

Also minerals such as phosphorus and potassium can be passed on from the fungi to the plants. Ectomycorrhizal fungi are able to dissolve rock to extract such minerals.

In forests the hyphae of ectomycorrhizal fungi form an extensive network linking together several trees. This highly branched network largely increases the surface of the plant roots and it also allows for exchanges of nutrients and water between trees. Water can travel from moist soil to dry areas to be absorbed by mycorrhizal plants therein.

Moreover, and this is the case with all mycorrhizal plants, the closure of stomata is faster and this gives these plants better resistance to water stress.

In acid soils, aluminium, iron and manganese can become soluble and some of these elements are toxic to plants. Some ectomycorrhizal fungi secrete siderophores, molecules with the ability to chelate certain metals, including the three mentioned above. This prevents the plants to be poisoned by toxic metals and would also prevent leaching of iron and manganese, which are essential to plant growth.

Studies discovered that certain fungi protect trees and plants against zinc in the soil.[9]

They are the most abundant type of mycorrhiza and the most ancient. It is likely that these fungi originated between 350 and 450 million years ago and probably played an essential role in the colonization of land by the plants. The hyphae of endomycorrhizal fungi penetrate directly into the starch-storing cortex cells of the plant root.

The most common type of endomycorrhiza and also overall type of mycorrhiza is Vesicular Arbuscular Mycorrhiza (VAM). This fungi forms vesicles (balloon-like structures) and arbuscles (tree-like structures) within the cortex of the plant roots it lives on. Plants like mosses and ferns, lilies and tulips, strawberries and violets, apples and oranges all have VAM.

The hyphae of ectomycorrhizal fungi form a mantle around the root and also grow into the spaces between root cells - but do not penetrate the root cells. The hyphae form a net-like covering, called a Hartig net[10], around the cells.

Ectomycorrhizal associations are formed mostly on the fine root tips of the host plant. They are more abundant in topsoil layers that contain humus.

Ectomycorrhizas are typically formed between the roots of around 10% of plant families, mostly woody plants including for example the birch, eucalyptus, oak, pine, and rose families, and certain types of fungi. Some of these fungi are symbiotic with only one particular genus of plant, while other form mycorrhizas with many different plants. An individual tree may have 15 or more different fungal ectomycorrhizal partners at one time. Thousands of ectomycorrhizal fungal species exist.

For all these trees, they could not compete or survive without the the help of their fungi symbionts. Some of these fungi are famous, such as the truffles, underground fruiting bodies of fungi of the genus Tuber. Other of these fungi are poisonous mushrooms. 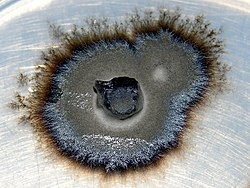 Ericoid mycorrhiza[11] are a symbiotic relationship between fungi and the roots of plants from the order Ericales (for example tea, blueberry, azalea).

The effect of chemical fertilizers and herbicides on mycorrhizae

"Michael Melendrez talks about the role of Mycorrhiza: endo/ecto." Part of the content: Grass roots of any kinds of grass grow with many mycorrhiza, which is why lawns and grass land still keeps much of their fertility despite otherwise wrong agricultural methods.

Retrieved from "https://eagle-rock.org/w/index.php?title=Mycorrhiza&oldid=11688"
Categories:
This page was last edited on 2 November 2013, at 01:30.
Privacy policy
About eagle-rock.org
Disclaimers