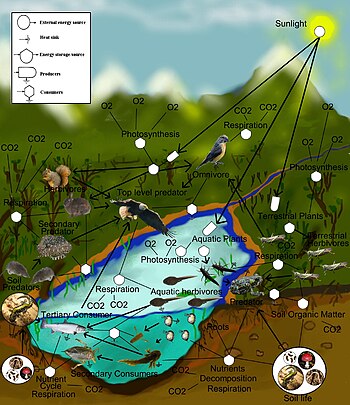 A food web of a freshwater and terrestrial environment

'Balance of nature' is the idea of an inherent equilibrium in ecosystems. Plants and animals are interacting in such a way that they form a stable and continuing system of life on Earth. Often the activities of human beings interrupt the balance, but nature has ways to bring back the balance, even this sometimes could take thousands, millions or even billions of years.

Organisms in ecosystems are adapted to each other. For example, the waste products of one species are used by another. Oxygen and energy produced by plants in photosynthesis is used by animals. Plants again use the waste product of animal respiration, carbon dioxide. Other examples of balance in nature are the nitrogen cycle and the symbiotic relationship that exists between a fungus and the roots of a higher plant (Mycorrhiza).

Food chain in a Swedish lake. Osprey feed on northern pike, which in turn feed on perch which eat bleak that feed on freshwater shrimp.

One animal feeds on another. For example, in a Swedish lake Osprey feed on northern pike, which in turn feed on perch which eat bleak that feed on freshwater shrimp.

A food chain is a food pathway that links different species in a community. In a food chain, energy and nutrients are passed from one organism to another. Most food chains contain not more than six species.

Each of the levels in a food chain is called a trophic level.[1] Each animal passes on about 10 percent of the energy it received. The rest is used in maintaining the body, in movement or it escapes as heat. So the amount of energy that is available decreases at each trophic level.

Decomposers are a vital part of food webs. During the process of decay, they break down the organic compounds in dead remains and release materials such as carbon dioxide back into the environment. Bacteria and fungi are the most important decomposers. (See also: Mycorrhiza & Micro-organisms in the soil.).

Predators can often maintain the balance of nature. When the prey species grows rapidly, the predators have more food and their population also expands. Predators mostly attack the weak prey. This helps in keeping the prey species strong and healthy.

The balance of nature is continuously upset, for example by parasites and diseases. Humans can also upset the balance with sometimes serious effects, for example by overhunting, pollution, deforestation, introducing new animals to a habitat, livestock grazing, pesticides, herbicides and the use of chemical fertilizers.

"In the early 1900’s, a stable population of deer lived on the Kaibab Plateau in Arizona. Hunters came in and killed all the predators of the deer, and the deer grew at an astounding rate. There was not enough food and many starved. Balance did not return for a long time.
Another story that occurred in 1998 was that the population of kelp in the northern Pacific Ocean dropped massively because orcas were raiding sea otters in the kelp beds. This made a boom in the population of sea urchins, the otters, favorite food. The sea urchins ended up eating the kelp, which decreased the population of the kelp."[3]

Ecology is the scientific study of the relations between living organisms and to their natural environment.

Ecosystems are hierarchical systems that are organized into a graded series of regularly interacting parts, for example species, that form higher orders of complex integrated wholes, communities. Ecosystems are sustained because of the biodiversity of the species within them.[4]

David Suzuki talks with Lovelock about the origin of his Gaia theory.

The Gaia hypothesis was formulated by James Lovelock. The Gaia hypothesis, also known as Gaia theory or Gaia principle, proposes that all organisms and their inorganic surroundings on Earth are closely integrated to form a single and self-regulating complex system, maintaining the conditions for life on the planet.[5]

According to Lovelock, "The entire range of living matter on Earth from whales to viruses and from oaks to algae could be regarded as constituting a single living entity capable of maintaining the Earth's atmosphere to suit its overall needs and endowed with faculties and powers far beyond those of its constituent parts...[Gaia can be defined] as a complex entity involving the Earth's biosphere, atmosphere, oceans, and soil; the totality constituting a feedback of cybernetic systems which seeks an optimal physical and chemical environment for life on this planet."[6]

Examples of the balance of nature processes that involve the entire earth are:

The grassland ecosystem and the food chain

James Lovelock about the Gaia hypothesis

Retrieved from "https://eagle-rock.org/w/index.php?title=Balance_of_nature&oldid=11750"
Categories:
This page was last edited on 1 December 2013, at 19:34.
Privacy policy
About eagle-rock.org
Disclaimers