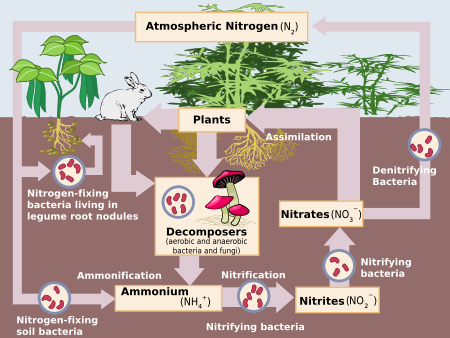 Diagram of the flow of nitrogen through the environment. The importance of bacteria in the cycle is a key element in the cycle, providing different forms of nitrogen compounds assimilable by higher organisms.

The diagram to the right shows how nitrogen gas that is present in the atmosphere goes into a cycle that makes nitrogen available to plants.

Plants need nitrogen for their growth. A main component of fertilizers is nitrogen in a form that plants can take in. One way to improve your soil is by adding compost that is rich in nitrogen. Another method is to grow legumes (for example peas and beans, and a few other plant species, not legumes) that form root nodules with nitrogen-fixing bacteria. Yet another method is to sow fast growing plants only for the improvement of your soil. These plants are called 'green manure' plants. Some examples of green manure plants are phacelia, rye and mustard but there are many more. Yet another method is to cover the soil with a layer of decomposing plants, in the form of hay or straw or material of any other plants. This method is called mulching. These plants decompose and enrich the soil with humus-forming components and also with nitrogen.

To enable a speedy process of ammonification and nitrification in your soil, your soil should not only be rich of compost or decomposing plant materials, but should also contain enough oxygen, as most micro-organisms and also animals such as rain worms that decompose these materials need oxygen. By bringing more oxygen into the soil you can also prevent denitrification to take place as denitrifying bacteria operate when there is not enough oxygen in the soil.

Oxygen can be brought into the soil in various ways. First by ploughing or cultivating a field. Second by adding enough organic material, in the form of mulch or compost or decomposed animal manure. Third by planting green manure plants and also plants that have deep roots. When these plants die, their roots leave channels in the soil where air with oxygen can penetrate.

Retrieved from "https://eagle-rock.org/w/index.php?title=Nitrogen_cycle&oldid=10584"
Categories:
This page was last edited on 29 June 2012, at 08:18.
Privacy policy
About eagle-rock.org
Disclaimers