Diagram of the process of photosynthesis

Photosynthesis is the process by which green plants and some other organisms use sunlight to synthesize foods from carbon dioxide and water. It is the magical process that makes all our gardening and farming worthwhile. Air (carbondioxide) and water and sunlight are transformed into energy (sugar) and the structural element (carbon) for cells and oxygen to breathe.

Photosynthesis is vital for all life on Earth that needs oxygen.

The exception are some organisms such as bacteria that live in hostile environments such as deep sea vents.[1]

Equation for the type of photosynthesis that occurs in plants 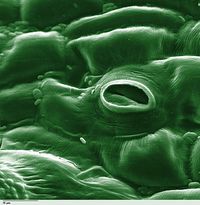 The gases that are exchanged in the process of photosynthesis enter and leave the plant through the stoma. Stomata are pores found in the outer layers of the skin (epidermis) of leaves and stems of plants. Also oxygen that is used for respiration of a plant enters through the stomata. In a process called transpiration, water vapor exits through the same openings. Many plants have most of their stomata at the lower surface of leaves.[8]

Chlorophyll is the magic compound that takes that sunlight and starts the whole process. Chlorophyll is a varied compound. There are four types of it. Chlorophyll (also chlorophyl) is a green pigment found in almost all plants.

Chlorophyll is registered as a food additive (colorant), and its E number is E140. Chlorophyll is used to color a variety of foods and beverages green, such as pasta and absinthe. Chlorophyll is not soluble in water, and it is first mixed with a small quantity of vegetable oil to obtain the desired solution.[10] 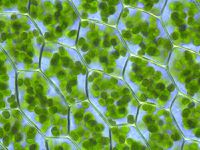 Plant cells with visible chloroplasts, from a moss Plagiomnium affine.

Summary, or what you should know

Retrieved from "https://eagle-rock.org/w/index.php?title=Photosynthesis&oldid=13419"
Categories:
This page was last edited on 6 February 2016, at 09:52.
Privacy policy
About eagle-rock.org
Disclaimers