Inviting the Divine into your life 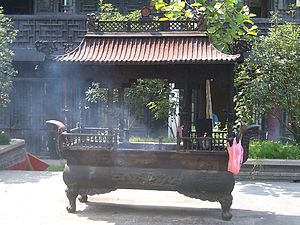 In our battled world we continue to ask why it is so dark around us and so far away from the divine sparks that we recognize in our own hearts and the hearts of many others. We have a desire for an ideal of goodness in that people love each other, but these ideal desires do already conflict with more mundane wishes that also can be found in our hearts. The world at large is nothing else than an expression of the contradictions that can be found in the hearts of all people. Some people apparently stand more on the side of goodness while others incline more to harm others. The difference is relative though.

Because the problem is not just in the outer world, it can also not exclusively be solved there. The starting point should not be at all in the external world. To make a better world, people must begin within their own lives, working for change within their own hearts and minds. Once something has been achieved there, the goodness acquired there may be expanded to the world outside. All religions did begin with focusing on changing the person from within. When we look at the general condition of religions today, we see that these religions have generally failed in that plan.

So we must go back to the roots of religious principles, finding back what we should apply to ourselves first of all. There's no meaning in religion if you don't first practice it yourself.

In this short series of blogs we first saw that faith is built up by giving out love. Love is rather meaningless when it isn't practiced. We practice love by giving. In religion, such giving is called an offering when the love is centered on God. When we fulfill to give in a good way, to the Creator and to fellow man, then we open our hearts for more truth. Gaining more truth, we know better how to live and overcome difficulties.

To fulfill offerings of love given to God is called a Foundation of Faith (FOF). Faith and love are built up over time. We make our own faith in goodness grow by doing good.

Faith in goodness, or having a good relation to God is meaningless when we don't pass on love to others. When we fulfill in doing this, when you or i unite with another person centering on the highest ideals, our love and faith has become substantial and we made what is called a Foundation of Substance (FOS).

There is still a next step to be made. When two people are united in good love, they need to protect that love. Suppose these people are united in love but they have no place to go, no room to put down sacred objects. All around them, both in the physical world and in spirit world are beings who want to destroy their good love and union. The good love and union must be expressed into their own environment, for example by building a house that is protected against aggressive invasions of those who could harm that love and faith.

Such a house is called a temple. All religions build temples. Sometimes temples have a different name, for example in Christianity they are usually called churches and in the Islam they are called mosques. Temples are places of worship but they should be much more than that. Also, temples should not just be built by larger organizations in religions, they should also be built by each of us, in our own homes, even when you only keep one room in your house for that.

When two or more people unite in love centering on the divine, their next step is to build and control a place where God can be invited. Basically this is a protected place. The meaning is mostly spiritual. It means that only spirits are allowed to come into that temple who are united with the people who build the temple.

Two or more people who built such a foundation, such a place where the Creator is welcomed, is called the Foundation to Follow God (FFG). The FFG is also the foundation to receive God. God can come when two people unite in love centering on divine ideals and when they expressed this love foundation into a place of worship.

The Foundation to Follow God is also an invitation for God to come and to give blessings of love and insight. Here is used the word 'follow' to not only emphasize that we should follow the instructions of the Creator in all that we do, but also that without having made such a foundation our own faith comes to hang in the air.

Such a temple also serves to invite other people to learn about God. Usually temples have the function that believers can offer there to God. Unfortunately, most temples are false temples. God's Spirit is not in such temples and when you offer there something, your offering doesn't go to God but it goes to the holders of the temple.

Many of us practice to have such a temple in some kind of way. In your house you may burn incense, which actually is an offering of an odor. You prepare food in your house. Rightly understood such preparing of food is an offering of things of creation. In a temple are altars that are places where the offerings are brought. There is an altar where the truth is offered, for example a table on that you read books of truth or a cabinet where you keep such books.

I will have to explain much more about offerings in coming blogs. Offerings traditionally must be split. This means, for example for odors, that you burn incense in a holy room and leave the bad odors of excrement in a toilet. But a toilet and a bath are also altars, they are altars on that you bring offerings of cleansing. When you prepare food, you separate it into what is good and what is garbage. If you don't do that well, you may get sick.

This article is part of a series of four

This page in other languages

Retrieved from "https://eagle-rock.org/w/index.php?title=Inviting_the_Divine_into_your_life&oldid=14455"
Categories:
This page was last edited on 6 December 2019, at 21:59.
Privacy policy
About eagle-rock.org
Disclaimers