Consider to merge this page with Preparing the soil 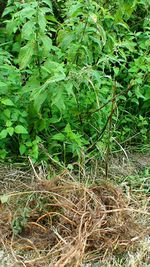 Stinging nettle. Some roots pulled out from the ground are shown in front.

The roots also make the soil very loose and crumbly.

"The growth of stinging nettle is an indicator that an area has high fertility (especially phosphorus) and has been disturbed.

In addition to this, bugs and small animals that live in the soil. For organic farming we need these micro-organisms. They make fertilizers and live in symbiosis with the roots of plants. Plants have their typical micro-organisms around them that feed their roots and protect them against disease. The best is to keep the soil covered with green like in grassland, or with a layer of mulch, like in a forest. I'll write about this more later. Once a soil is treated well it becomes a bit like a sponge and doesn't need much treatment. In ancient times many peoples didn't use plows that turned the soil upside down, they used a kind of cultivator-plow, a pin pulled through the ground. It didn't disturb the soil layers.

How to prepare a rock hard soil

I would use two methods, one mechanical and the other one applying composting and mulching methods.

I don't know if 'rock hard ground' means that there literally are rocks in the soil? In that case you'll have to remove the rocks by hand. People have done this since oldest times and built banks around their fields with such rocks.

To do 2 acres by hand is much work, so i would use some kind of cultivator, like for example a Honda tiller. See: http://en.wikipedia.org/wiki/Cultivator You can usually rent such equipment for a few days. Maybe you can rent a tractor with cultivator to do the same. There also exist agricultural milling machines that really make the soil loose but which also disrupt the natural layer buildup of the soil, and they usually only work for the upper surface. A plough is of course another option.

Once the soil is loose, you can keep it loose by adding enough compost. You can also put a layer of any biological waste, grass, straw, weeds on top of the soil. The layer of mulch should be rather thick, up until one feet. You can move the mulch aside for planting and sowing, or for finer crops remove the entire sheet of mulch (use it on the compost heap) after it has been on the soil for at least half a year. Underneath the mulch develops rich microbe life and also rain wurms and other small creatures will help to improve the structure of the soil. The mulch will gradually disintegrate and add biological material to your soil.

To keep the soil in good order, it can be helpful to periodically sow fields with deep-rooting crops, such as lupine, hemp, or even stinging nettles. There may be other such crops available where you live.

I don't know if the pH of your soil is ok? If not, that also may badly influence the structure of the soil. You can do some test yourself with litmus paper or have it tested by a laboratory that does such things.

There could be problems with the different layers of the soil (so-called soil horizons): http://en.wikipedia.org/wiki/Soil_horizon To see the profile of your soil: dig a hole of several feet deep and make sure that with a spade you cut a very even surface on one of the walls of the hole. That's how you can study the soil horizons. You can also find out how deep the ground water level is. There may be some problem with an deeper layer in your soil that prevents plants from rooting deeply or reaching water in the ground. In that case you may have to apply deep-cultivation (the same as cultivating the surface but much deeper).

When you have a small garden and you wish to maximize its production, here's something you can do. Loosen the soil deeper than you normally would. Normally we loosen a garden soil by spading it, one spade deep. I prefer using a digging fork that also goes one spade deep. What you actually do is bringing air into the top layer of the soil. Instead of going one spade deep, you can go ca twice as deep. Be careful though to not bring worthless sand to the top layer. Roots of plants need oxygen so they grow better in an airy soil. Also useful micro-organisms need oxygen. Many plants wish to root deeper if they could. So loosening the soil deeper than what is usually done allows these plants to grow bigger and longer roots. In that way the plant can take in more nutrients and the entire plant will grow faster and bigger. A soil that doesn't contain enough air and not enough humus will fill up or silt up when heavy rain falls on it. When there's not enough oxygen in the soil, this also lowers the pH of the soil. Many plants don't like this because they cannot take in the nutrients at a lower pH. Another reason why it is important to keep your soil loose.

Retrieved from "https://eagle-rock.org/w/index.php?title=Soil_management&oldid=13332"
Categories:
This page was last edited on 23 January 2016, at 07:49.
Privacy policy
About eagle-rock.org
Disclaimers