This is Section 5 of the Gardening Seminar:Start your own garden. Comments or questions are appreciated. You can also write to John Eagles.
Consider to merge this page with Soil management

Why do we have to prepare a soil for a garden?

We wish to give advantage to the crops that we cultivate and not to many other plants that would otherwise grow on our fields. These other plants we usually call 'weeds.' When you start out with a garden that wasn't cultivated before, you generally first must get rid of the sod of grass and other plants that have formed. Another important matter is that you want to bring air into the soil. Aerating a soil is done by delving, digging, plowing or cultivating a soil.

Why does a soil need air?

Also, when a soil isn't loosened, rain water can assemble in soil layers where the roots of your crops need to grow. In a loosened soil excess water can drain down to ground water level, and through the capillary flow [1] again reaches higher layers in times of dry weather.

We shall now first look at the different layers in a soil, then learn how to dig or cultivate a soil, and finally share some thoughts about water management in a soil. 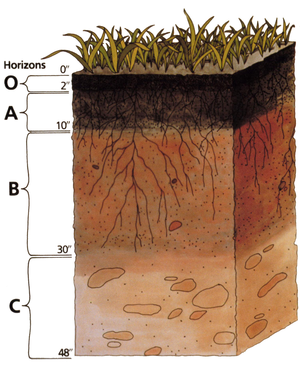 In case you find the explanation about soil horizons too complex, go to the subsection below called The three main layers for gardening.

Soil horizons are horizontal layers in the soils whose characteristics differ from the layers above and beneath[2].

The diagram right shows the main soil horizons. They are the O horizon (O from organic), and the A, B and C horizons (named in alphabetical order).

This is a layer of organic matter or plant residues, such as from leaves and branches, and also animal waste, in relatively undecomposed form. This is not the same as actual leaf litter, as the O horizon already contains weathered mineral particles that are part of the soil.

The A horizon and O horizon together form what is known as topsoil. Topsoil is the upper, outermost layer of soil, usually the top 2 inches (5.1 cm) to 8 inches (20 cm). It has the highest concentration of organic matter and microorganisms and is where most of the Earth's biological soil activity occurs[3].

Plants generally concentrate their roots in and obtain most of their nutrients from this layer.

In the A horizon we find dark decomposed organic materials, also called "humus"[4].

Soil organisms such as earthworms, potworms, fungi, and many species of bacteria live here, often in close association with plant roots. Therefore the A horizon is sometimes called 'biomantle.[5]'

The B horizon is also called subsoil. It consists of mineral layers which may contain concentrations of clay or minerals such as iron or aluminium oxides or organic material moved there by leaching from higher soil layers. Plant roots penetrate through this layer, but it has very little humus. It is usually brownish or red because of the clay and iron oxides washed down from the A horizon.[6]

Also called Parent rock. This layer is less affected by weathering. It may contain lumps of unweathered or unbroken rock and is further made up of small fragments. Some more soluble compounds from higher layers may accumulate here. The C horizon also contains parent material, or the underlying bedrock or superficial sedimentary deposits from which the higher layers of soil inherit a great deal of their structure and minerals.

The three main layers, for gardening

For the practical purpose of gardening, i generally distinguish three main soil layers:

Methods of preparing and loosening a soil

When a soil is covered with a sod of grass and other plants, a first task in preparing a soil is to get rid of this. Today many farmers use chemicals to kill everything that grows on a piece of land, and after this they cultivate and/or plow the land. That's not a method that can be used in organic gardening.

A method that is sometimes used to get rid of the sod is by burning it away with gas burners. I've tried this out but it doesn't work well and it is expensive.

Covering the field with a thick layer of mulch. Hay or straw are appropriate, but you'll have to put on a very thick layer of almost one foot (ca 25 cm is needed). And you may have to wait up until half a year until all the plants underneath the mulch have died. After this you have to take away the mulch and then dig, cultivate or plow the soil.

One possibility is to cut off the sod with a hoe. This is possible when the sod is not too tight.

Another possibility is to use the grelinette in combination with a hand cultivator. The grelinette is a useful tool in organic farming. It doesn't disturb the layers of the soil and it's easier than a spade to prepare a soil for planting or sowing. 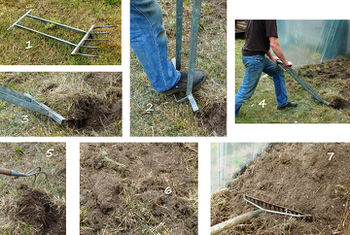 For a slightly bigger field you can use motor powered rototillers or cultivators. Some of these rototillers completely grind the soil until a depth of ca 20 cm. When you worked manually or with a motor cultivator that only loosens the soil, you'll need to use a rake to assemble all the green stuff and roots and remove this from the field. After this you plow or dig or cultivate again to loosen the soil to the required depth.

Cutting off the sod

The third method is to cut off the sod with a spade and place that sod upside down into a trench that you delved with the spade, after which you put a spade with soil on top of that.

Normal digging with a spade

The diagram right shows how to proceed for normal digging with a spade.

When you have a small garden and you wish to maximize its production, here's something you can do. Loosen the soil deeper than you normally would. Normally we loosen a garden soil by spading it, one spade deep. I prefer using a digging fork that also goes one spade deep. What you actually do is bringing air into the top layer of the soil. Instead of going one spade deep, you can go ca twice as deep. Be careful though to not bring worthless sand to the top layer. Roots of plants need oxygen so they grow better in an airy soil. Also useful micro-organisms need oxygen. Many plants wish to root deeper if they could. So loosening the soil deeper than what is usually done allows these plants to grow bigger and longer roots. In that way the plant can take in more nutrients and the entire plant will grow faster and bigger. A soil that doesn't contain enough air and not enough humus will fill up or silt up when heavy rain falls on it. When there's not enough oxygen in the soil, this also lowers the pH of the soil. Many plants don't like this because they cannot take in the nutrients at a lower pH. Another reason why it is important to keep your soil loose.

Double digging with a spade

First the top layer is dug off with a spade, forming a shallow trench, and then the under-layer (at the bottom of the trench) is dug with a fork. When breaking up the lower layer, organic matter such as compost is usually added to the soil. A second trench is then started, backfilling the first trench. This process is repeated until the whole bed has been treated. There will be soil left over from the first trench, which is used to fill the last trench.[8]

Groundwater level is important for your garden. When groundwater is too high, it's difficult or impossible to cultivate a number of crops. Also when the groundwater table is too low, many plants won't grow well.

I've tried to find exact figures for ideal groundwater tables for agriculture and gardening. I couldn't find them, probably because circumstances are so different for soils around the world and also for different crops. I did however find the following information:

At any rate, in your garden you'll soon find out whether the groundwater table is too high or too low.

A basic tip is to look around you what people around grow in their gardens and what farmers grow on their land. That gives you an indication of what's possible in your own garden.

What to do when your garden is too wet? You can dig trenches, or in some cases even apply some kind of drainage method[10].

What to do when your garden is too dry? It happens frequently in my own garden and i use a pump and sprinklers, or i walk with watering cans. In some gardens you may have to install some kind of permanent irrigation system[11].

Retrieved from "https://eagle-rock.org/w/index.php?title=Preparing_the_soil&oldid=13331"
Categories:
This page was last edited on 23 January 2016, at 07:49.
Privacy policy
About eagle-rock.org
Disclaimers